Glaisdale is a village and civil parish in the Scarborough district of North Yorkshire, England, within the North York Moors National Park. It lies at on the River Esk, between the villages of Lealholm and Egton Bridge, 8 miles (13 km) west of Whitby, and is served by Glaisdale railway station on the Esk Valley Line. The village lies on the regional walking route, the Esk Valley Walk, and on the north of England's Coast to Coast Walk.

Glaisdale Parish Church is dedicated to St. Thomas and is one of five churches within the United Benefice of Middle Esk Moor. The present church dates from 1793. An earlier "Chappell of Glaisdale", a cruciform straw-thatched building, was located on the same site: a date stone of 1585 may be seen in the side of the steps leading to the present church tower. 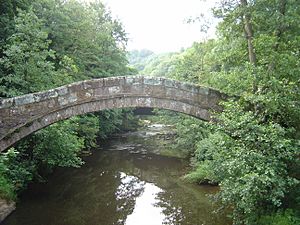 At the eastern edge of the village lies Beggar's Bridge, built by Thomas Ferris in 1619. Ferris was a poor man who hoped to wed the daughter of a wealthy local squire. In order to win her hand, he planned to set sail from Whitby to make his fortune. On the night that he left, the Esk was swollen with rainfall and he was unable to make a last visit to his intended. He eventually returned from his travels a rich man and, after marrying the squire's daughter, built Beggar's Bridge so that no other lovers would be separated as they were. The bridge is now Grade II* listed.

All content from Kiddle encyclopedia articles (including the article images and facts) can be freely used under Attribution-ShareAlike license, unless stated otherwise. Cite this article:
Glaisdale Facts for Kids. Kiddle Encyclopedia.