The glaucous-winged gull (Larus glaucescens) is a large, white-headed gull. The genus name is from Latin Larus which appears to have referred to a gull or other large seabird. The specific glaucescens is New Latin for "glaucous" from the Ancient Greek, glaukos, denoting the grey color of its wings.

The glaucous-winged gull is rarely found far from the ocean. It is a resident from the western coast of Alaska to the coast of Washington. These glaucous winged gulls can also be found in the Seattle area. It also breeds on the northwest coast of Alaska, in the summertime and in the Russian Far East. During winter, they can be found along the coast of California, Oregon, Baja California, Baja California Sur, and Sonora. It frequently hybridizes with western gull resulting in identification problems—particularly in the Puget Sound area. This species also hybridizes regularly with the herring gull in Alaska. Both hybrid combinations resemble the Thayer's gull. Glaucous-winged gulls are thought to live about 15 years, but some live much longer; a bird in British Columbia, for example, lived for more than 21 years, while one in the US state of Washington lived for at least 22 years, 9 months. The longevity record though, is more than 37 years, for a bird banded as a chick in British Columbia.

It is an exceptionally rare vagrant to the Western Palearctic region, with records from Morocco, the Canary Islands and, most recently, from Ireland in February and March 2016. It has also been recorded in Britain in the winters of 2006/2007 and 2008/2009. The 2008/2009 record was from Saltholme Pools, Cleveland, and attracted hundreds of twitchers. 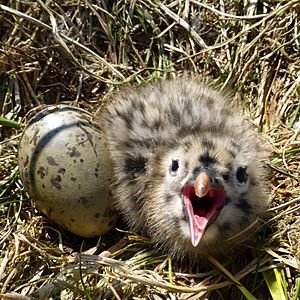 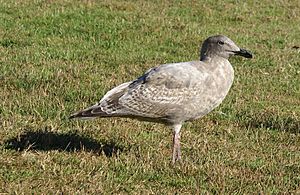 The glaucous-winged gull nests in the summer, and each pair produces two or three chicks which fledge at six weeks.

It feeds along the coast, scavenging for dead or weak animals, fish, mussels and scraps. In urban areas it is well known for its tendency to accept food from people and peck open unprotected garbage bags in search of edibles. Its cry is a low-pitched "kak-kak-kak" or "wow", or a more high-pitched wailing.

All content from Kiddle encyclopedia articles (including the article images and facts) can be freely used under Attribution-ShareAlike license, unless stated otherwise. Cite this article:
Glaucous-winged gull Facts for Kids. Kiddle Encyclopedia.