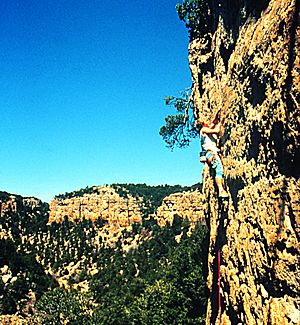 Scenery along the byway.

The Gold Belt Byway is a National Scenic Byway and Bureau of Land Management Back Country Byway located entirely within the US state of Colorado. The byway received its name because it runs through Colorado's gold country. It connects the gold mining districts to each other and to the Arkansas Valley.

The Gold Belt Byway is made up mostly of roads that connected mining towns to the Arkansas Valley. The road travels by some abandoned mines, buildings, and towns that prospered during the Colorado Gold Rush that can be seen. Along the byway, numerous buildings that have been unchanged since the mines went bust are also visible.

The Gold Belt Byway contains many roads. Most of them are dirt roads that are narrow and run through canyons and other geological features.

Phantom Canyon Road is a scenic road that connects Cañon City and Victor. The road goes through Phantom Canyon. The road has two tunnels and three elevated bridges. It has many camp locations. It was originally the route of a railroad that connected Florence and Cripple Creek. The route contains many narrow roads and high wooden bridges. The road is unpaved. 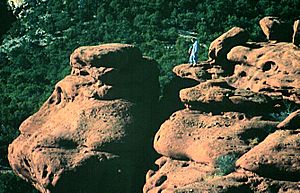 A Climber In the Shelf Road Portion of the byway.

Shelf Road is a portion of the byway going through Fourmile Canyon. It was originally used as a stagecoach road. The cliffs of the canyon near Shelf Road offer some of the best sport climbing in Colorado.

High Park Road was the first route to connect gold mines with the Arkansas Valley. Unlike Shelf Road and Phantom Canyon Road, it doesn't run through a canyon and is entirely paved. High Park Road is located in area where cattle ranching takes place.

Teller County Road 1, shortened to Teller 1, was the first stagecoach route to Cripple Creek and thus it is called County Road 1. It is a paved road that offers diverse views of scenery. For example, along the road are steep mountains and rolling hills where cattle graze.

Gold Camp Road follows the former railroad from Colorado Springs to Cripple Creek called the "Short Line". In the 1920s the railroad was converted to a car toll road, eventually becoming a free public road. In 1988, tunnel #3 collapsed and was never repaired. This portion of the road is now closed to vehicular traffic and is popular with bikers and hikers, and vehicular traffic was rerouted to Old Stage Road behind The Broadmoor. In September 2013, flooding washed out a large portion of the road between tunnels one and two. It is said that the tunnels are haunted and many stories abound concerning the tunnels. 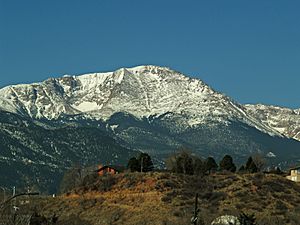 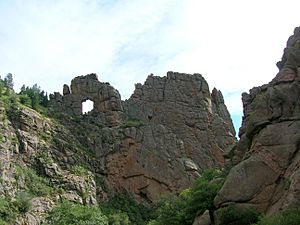 Major landmarks along the route include the following:

All content from Kiddle encyclopedia articles (including the article images and facts) can be freely used under Attribution-ShareAlike license, unless stated otherwise. Cite this article:
Gold Belt Byway Facts for Kids. Kiddle Encyclopedia.