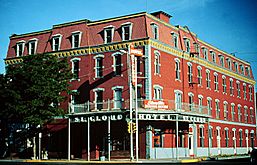 Located in Cañon City's National Historic District, the St. Cloud Hotel has stood at the corner of 7th and Main since 1888. It is currently unoccupied and in disrepair after a string of failed attempts to revive the business. The hotel was moved brick by brick from Silver Cliff, CO in 1888. 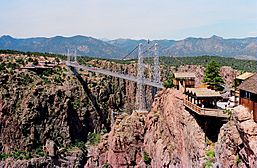 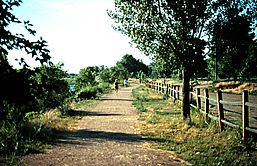 Arkansas Riverwalk in Cañon City is part of John Griffin Regional Park. It is owned and operated by the Cañon City Area Metropolitan Recreation and Park District.

Cañon City is a Home Rule Municipality that is the county seat and the most populous municipality of Fremont County, Colorado, United States. The city population was 16,400 at the 2010 United States Census. Cañon City straddles the easterly flowing Arkansas River and is a popular tourist destination for sightseeing, whitewater rafting, and rock climbing. The city is noted for being the location of nine state and four federal prisons and penitentiaries, and a welcoming sign says, "Corrections Capital of the World."

In 1994, the United States Board on Geographic Names approved adding the tilde to the official name of Cañon City, a change from Canon City as the official name in its decisions of 1906 and 1975. It is one of the few U.S. cities to have an Ñ in its name, others being La Cañada Flintridge, California; Española, New Mexico; Peñasco, New Mexico; and Cañones, New Mexico.

Cañon City was laid out on January 17, 1858, during the Pike's Peak Gold Rush, but then the land was left idle. A new company "jumped the claim" to the town's site in late 1859, and it put up the first building in February 1860. This town was originally intended as a commercial center for mining in South Park and the upper Arkansas River.

In 1861, the town raised two companies of volunteers to serve with the Second Colorado Infantry during the American Civil War. This regiment fought in skirmishes in nearby New Mexico and as far east as the Indian Territory (Oklahoma) and Missouri before ending its organization in 1865.

In 1862, A. M. Cassaday drilled for petroleum 6 miles (10 km) north of Cañon City, close to a known oil seep. Cassaday struck oil at the depth of 50 feet (15 m), and he completed the first commercial oil well west of the Mississippi River. He drilled five or six more wells nearby, and he refined kerosene and fuel oil from the petroleum. Cassaday sold the products in Denver.

A number of metal ore smelters were built in Cañon City following the discovery of gold at Cripple Creek in 1891.

The Cañon City Downtown Historic District is an historic district that was listed on the National Register of Historic Places in 1983.

The city's nickname, "the Climate Capital of Colorado", derives from the combination of unique geography and 5,300-foot (1,600 m) elevation protecting the city from harsh weather conditions. The average daily high temperature in January is 14 °F (10 °C) warmer in Cañon City than in Grand Junction, even though the elevation of Cañon City is higher.

As Cañon City has grown, the city has both annexed surrounding communities and developed new subdivisions to create the city that exists today.

Cañon City is home to many city-owned parks, as well as parks owned by the Cañon City Area Recreation and Park District.

The Cañon City Area Recreation and Park District, commonly called the Rec District, was created in 1965 to better serve the community's recreational needs with parks, the R.C. Icabone Pool (a public swimming pool), a dog park, an archery range and a ropes course along with a rec district office with a community room.

The following parks are operated and owned by the Rec District:

There were 6,164 households out of which 28.8% had children under the age of 18 living with them, 48.0% were married couples living together, 10.5% had a female householder with no husband present, and 38.3% were non-families. 33.7% of all households were made up of individuals and 17.2% had someone living alone who was 65 years of age or older. The average household size was 2.27 and the average family size was 2.90.

Transportation in the Cañon City area consists of cab service, shuttle bus service, and a downtown wagon ride. The Royal Gorge Bridge trolley had also been used during special events (it was destroyed in the Royal Gorge Fire, but it was reserved for use by the Royal Gorge Bridge & Park. Jeep tours and Segway tours are also available to explore local parks such as Red Canyon Park or scenic places such as Skyline Drive.

The area is served by one state and one U.S. highway with a mix of city and county roads to navigate the city or connect to neighboring areas.

The city is depicted in an alternate history, in Philip K. Dick's novel The Man in the High Castle (1963) and eponymous 2015 television series based on it. Cañon City is located in the neutral zone situated between the puppet states of the Japanese Pacific States and Greater Nazi Reich in the former United States.

All content from Kiddle encyclopedia articles (including the article images and facts) can be freely used under Attribution-ShareAlike license, unless stated otherwise. Cite this article:
Cañon City, Colorado Facts for Kids. Kiddle Encyclopedia.