The City of Victor is a Statutory City in Teller County, Colorado, United States. Gold was discovered in Victor in the late 19th century, an omen of the future of the town. With Cripple Creek, the mining district became the second largest gold mining district in the country and realized approximately $10 billion of mined gold in 2010 dollars. It reached its peak around the turn of the century when there were about 18,000 residents in the town. Depleted ore in mines, labor strife and the exodus of miners during World War I caused a steep decline in the city's economy, from which it has never recovered. The population was 397 at the 2010 census. There is a resumed mining effort on Battle Mountain.

Victor was founded in 1891, shortly after Winfield Scott Stratton discovered gold nearby. The town was named after the Victor Mine, which may have been named for an early settler, Victor Adams. In 1892 Harry, Frank and Warren Woods founded the Mt. Rosa Mining, Milling and Land Company. Battle Mountain, located just above Victor, had the largest, most prolific mines in the mining district and the town became known as the "City of Mines." Victor officially became a city on July 16, 1894. In 1894 the Woods brothers discovered gold when they began digging the foundation for a building, which resulted in the creation of the Gold Coin Mine. At that time 8,000 people lived in Victor.

Although Victor's fame was overshadowed by that of its neighbor, Cripple Creek, many of the best gold mines of the Cripple Creek district were located at Victor, including Stratton's Independence Mine and Mill and the Portland Mine. Half of Battle Mountain's gold was extracted by the Portland Mine, which was called the 'Queen of the District." Heavyweight boxing champion William Harrison "Jack" Dempsey was a mucker in the Portland Mine.

Mine owners and investors lived in Cripple Creek, while most of the miners for the districts' 500 mines lived in Victor.

In August 1899 the entire business district was destroyed in a five-hour fire. The town had about 18,000 residents at the time. As a result, many of the historic buildings date to 1899, including the St. Victor Roman Catholic church, the First Baptist Church of Victor, and the Victor Hotel. 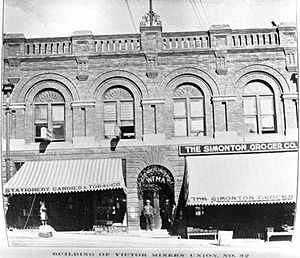 The Western Federation of Miners (WFM) began to organize workers in a fight for shorter work days and standard wages. The workforce became heavily unionized after the Western Federation of Miners conducted a significant strike in 1894. A subsequent strike in 1903 had such an impact that it came to be called the Colorado Labor Wars. At this point, the amount of available ore to mine had declined significantly and mining in the district was further impacted by slow production as the result of violent strikes.

The town declined steadily in the 20th century, as the gold mines became worked out, and the cost of mining rose relative to the price of gold (fixed at $20.67/troy ounce). Area miners enlisted during World War I, and the loss of workers created a steep decline in mining activity from which the area has not recovered.

Gold mining increased in 1934 when the federal government raised the price of gold to $34/ounce, but gold mining was shut down during World War II as nonessential to the war effort. Some mines opened after the war, but all mines in the district closed by 1962.

The Cripple Creek & Victor Gold Mining Company formed in 1976 as a joint venture to restart mining in the district. From 1976 to 1989, the company produced 150,000 troy ounces (4,600 kg) of gold by reprocessing tailings and mining two small surface deposits. The Cripple Creek & Victor Gold Mining Company began the first large-scale open pit mining in the district in 1994. In 1995 an open pit gold mining operation, which taps into "legendary" mines, began on Battle Mountain. The Cresson mine open pits are located a few miles north of Victor. Mining continues at the Cripple Creek & Victor Gold Mine, under the ownership of AngloGold Ashanti, producing about 250,000 troy ounces of gold in 2012, in addition to several locally owned mines, all of which provide employment and revenue for the community.

Victor is in the heart of Colorado's gold country, home to two of the major gold mines in the Cripple Creek mining district. Though the goldrush-era mines are closed, near the center of town the fortress-like remains of a wrought iron-gated mine entrance, shaft elevators (which carried the miners down), mine carts (now employed by the town as flower planters), barred tunnels, two outbuildings (an office overlooking the entrance and the building from which the miners set out), and other sites of interest from that era still stand. Several towering 'gallows frames', which house the antique elevator pulleys, can be seen on the hillsides. Victor has many mining and history related attractions:

"Victor Celebrates the Arts" is a judged painting contest held on Labor Day weekend, which began in 2000.

Students are served by the Cripple Creek-Victor High School.

All content from Kiddle encyclopedia articles (including the article images and facts) can be freely used under Attribution-ShareAlike license, unless stated otherwise. Cite this article:
Victor, Colorado Facts for Kids. Kiddle Encyclopedia.