Goombungee War Memorial is a heritage-listed memorial at Hartwig Street, Goombungee, Toowoomba Region, Queensland, Australia. It was built in 1920 by R C Ziegler and Son. The architect was Harry Marks. It was added to the Queensland Heritage Register on 21 October 1992.

The Goombungee War Memorial was unveiled on 11 December 1920 by Major General Sir Thomas William Glasgow, and Brigadier-General James Campbell Robertson CB, CMG, DSO, MID (x7) represented the Toowoomba sub-branch of the R.S.S.I.L.A. It was designed by Henry James (Harry) Marks and produced by masons R C Ziegler and Son of the Downs Electric Monumental Works. The stone memorial honours the local men who fell in the First and Second World Wars.

In 1919, the residents of Goombungee wrote to the New South Wales Memorials Advisory Board for advice regarding its proposed memorial. The board referred their request to the Queensland Institute of Architects and Toowoomba architect Harry Marks subsequently prepared the design.

Henry (Harry) James Marks was born in Toowoomba in 1871. After training with his father James, also an architect, he entered into partnership with him in 1892. He was considered a creative designer and was responsible for many buildings on the Darling Downs as well as two Roman Catholic Churches in Brisbane. In 1925 he became an Associate of the Queensland Institute of Architects, becoming a Fellow 1929. He died in Toowoomba in 1939 after spending his entire career there. The memorial is an unusual example of his work.

Although the monument was produced by well known Toowoomba masons R C Ziegler and Son, it is likely that the digger statue was imported from Italy.

The firm of R C Ziegler and Son was established in Toowoomba in c. 1902 and produced many memorials throughout south western Queensland. The family company moved to Bundaberg where it was still operating in 2014.

Australian war memorials are also valuable evidence of imperial and national loyalties, at the time, not seen as conflicting; the skills of local stonemasons, metalworkers and architects; and of popular taste. In Queensland, the digger statue was the popular choice of memorial, whereas the obelisk predominated in the southern states, possibly a reflection of Queensland's larger working-class population and a lesser involvement of architects. 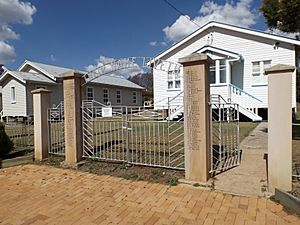 The First World War Memorial is situated at the intersection of the two main streets in Goombungee.

The painted sandstone memorial comprises a pedestal surmounted by a digger statue.

It sits on a large square base of smooth-faced stone. Projecting from this is recessed square section with leaded marble plates on each face. These bear the names of the 29 local men who fell in the First World War and the 8 who fell in the Second World War. Also projecting from the base, at each corner are free-standing columns with Doric order capitals and bases. These support a large cornice consisting of a series of steps and mouldings.

The digger statue stands above this on a base of three steps, square in plan, of decreasing size. His head is bowed and his hands rest on the top of a rifle which is reversed.

Goombungee War Memorial was listed on the Queensland Heritage Register on 21 October 1992 having satisfied the following criteria.

Unveiled in 1920, the memorial at Goombungee demonstrates the principal characteristics of a commemorative structure erected as an enduring record of a major historical event. This is achieved through the use of appropriate materials and design elements. As a digger statue it is representative of the most popular form of memorial in Queensland.

This particular memorial is of aesthetic significance both as a dominant landmark and for its high degree of workmanship and design.

It has a strong association with the community as evidence of the impact of a major historic event.

It also has special association with Toowoomba architect H J Marks as an unusual example of his work, and with monumental masons R C Ziegler and Son.

All content from Kiddle encyclopedia articles (including the article images and facts) can be freely used under Attribution-ShareAlike license, unless stated otherwise. Cite this article:
Goombungee War Memorial Facts for Kids. Kiddle Encyclopedia.