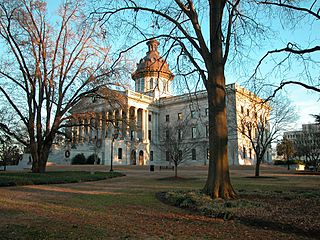 South Carolina has historically had a weak executive branch and a strong legislature. Before 1865, governors in South Carolina were appointed by the General Assembly, and held the title "President of State." The 1865 Constitution changed this process, requiring a popular election for governor.

In 1926 the governor's term was changed to four years. In 1982 governors were allowed to run for a second term. In 1993 a limited cabinet was created, all of whom must be popularly elected.

The South Carolina Constitution since 1993 provides for separate election of nine executive officers, making a limited cabinet. This is a large number of elective offices compared to most states, which generally give the governor the executive power to appoint members of the cabinet.

Each officer is elected at the same time as the governor. The separately elected positions allow for the possibility of multiple parties to be represented in the executive branch. The Governor's Cabinet also contains several appointed positions. In most cases, persons who fill cabinet-level positions are recommended by the governor and appointed by the Senate.

Originally, each county elected one senator and at least one representative. The vast differences between rural and urban counties gave rural areas an outsized influence over state government. This state of affairs ended with the federal case of Reynolds v. Sims, which mandated that state legislative districts be drawn based on population.

The Family Court deals with all matters of domestic and family relationships, as well as generally maintaining exclusive jurisdiction over cases involving minors under the age of seventeen, excepting traffic and game law violations. Some criminal charges may come under Circuit Court jurisdiction.

The South Carolina Circuit Court is the trial court of general jurisdiction court for South Carolina. It consists of a civil division (the Court of Common Pleas) and a criminal division . (the Court of General Sessions). It is also a superior court, having limited appellate jurisdiction over appeals from the lower Probate Court, Magistrate's Court, and Municipal Court, and appeals from the Administrative Law Judge Division, which hears matters relating to state administrative and regulatory agencies. South Carolina's 46 counties are divided into 16 judicial circuits, and there are currently 46 judges. Circuit court judges are elected by the General Assembly to staggered six-year terms.

The South Carolina Court of Appeals is the state intermediate appellate court. It hears all Circuit Court and Family Court appeals, excepting appeals that are within the seven classes of exclusive Supreme Court jurisdiction. The Court of Appeals is selected by the General Assembly to staggered six-year terms. The court comprises a chief judge, and eight associate judges, and may hear cases as the whole court, or as three panels with three judges each. The court may preside in any county.

The South Carolina Supreme Court is the state supreme court. The Chief Justice and four Associate Justices are elected to staggered ten-year terms. There are no limits on the number of terms a justice may serve, but there is a mandatory retirement age of 72. The overwhelming majority of vacancies on the Court occur when Justices reach this age, not through the refusal of the General Assembly to elect a sitting Justice to another term.

South Carolina has had seven constitutions:

Since 1895, many residents have called for a new Constitution, one that is not based on the politics of a post-Civil War population. Governor Mark Sanford called for constitutional reform in his 2008 State of the State speech. Several hundred amendments have been made to the 1895 Constitution (in 1966 there were 330 amendments). Amendments have been created to comply with federal acts, and for many other issues. The volume of amendments makes South Carolina's constitution one of the longest in the nation.

Historically, local governments in South Carolina have been fairly weak. The 1867 constitution established home rule for counties. This was changed under the 1895 Constitution, which made no provision for local government and effectively reduced counties to creatures of the state. Each county's delegation to the General Assembly also doubled as its county council. Under this system, the state senator from each county exercised the most power. Reynolds v. Sims required reapportionment according to the principle of "one man, one vote", which resulted in legislative districts crossing county lines. However, it was not until 1973 that the constitution was amended to provide for limited home rule at the county level. The Home Rule Act in 1975 implemented this. This law provided for elected councils in each county. Nonetheless, the legislature still devotes considerable time to local issues, and county legislative delegations still decide many matters that are handled at the county level in most other states.

Municipal governments may incorporate as cities or towns. However, there is no legal difference between the two. Compared to cities in neighboring states, South Carolina cities are fairly small in size and population, since state law makes annexation difficult.

Like most Southern states, South Carolina consistently voted Democratic in the 19th century and the first half of the 20th century as a part of the Solid South. The Democratic block was maintained due to disenfranchisement of most black voters since 1895; the Republican Party had been nearly destroyed.

The Republican Party became competitive in the 1960 presidential election when Richard Nixon lost the state to John F. Kennedy by just two percentage points. In 1964, Barry Goldwater became the first Republican to win the state since Reconstruction. Mid-20th century issues have led to major realignments of parties in the South, particularly following passage of the Civil Rights Act of 1964 and Voting Rights Act of 1965, supported by the National Democratic Party and providing for the protection of minority participation in the political system. Conservative whites have joined the Republicans, and African Americans have largely supported Democratic Party candidates.

Since then, South Carolina has voted for a Republican in every presidential election from 1964 to 2012, with the exception of 1976 when Jimmy Carter, from Georgia, won the state over Gerald Ford. John McCain won the state in 2008 with 54% of the statewide vote over Barack Obama. Republicans now hold the governor's office and all other statewide offices, control both chambers of legislature, and include both U.S. Senators, and six of seven members of the U.S. House of Representatives. Every presidential election year, the South Carolina primary is the first such primary in the South; both the Republicans and Democrats consider it important. The primary is important to the Republicans because it is a conservative testing ground. The Democrats can gauge support of their candidates among the large proportion of African Americans who vote in that primary. From 1980 to 2008 the winner in the Republican primary has been chosen as the party nominee.

In the 112th United States Congress, the South Carolina delegation to the U.S. Senate are:

US House of Representatives

A district map is found here.

The state does not allow casino gambling, but it authorized the operation of video poker machines throughout the state. This yielded revenue of approximately $2 billion per year deposited into the state's coffers. But, in 2000 the legislature banned video poker, requiring machines to be shut off and removed from the state by July 8.

The state's personal income tax has a maximum marginal tax rate of 7 percent on taxable income of $13,351 and above.

State sales tax revenues are used exclusively for education. South Carolina has a 6% state sales tax, but when combined with local and county taxes, South Carolina has the second-highest sales tax in the United States next to California. In Charleston, South Carolina, the tax rates equals 10.5% with state tax, county tax, local option tax, and the hospitality tax. Some items have different rates; e.g., the tax is 3% on unprepared food items and 7% on sleeping accommodation rentals. Individuals 85 or older get a one-percent exclusion from the general sales tax. Counties may impose an additional 1% local option sales tax and other local sales taxes, and local governments may impose a local accommodations tax of up to 3%.

South Carolina imposes a casual excise tax of 5% on the fair market value of all motor vehicles, motorcycles, boats, motors and airplanes transferred between individuals. The maximum casual excise tax is $300.

Property tax is administered and collected by local governments with assistance from the South Carolina Department of Revenue. Both real and personal property are subject to tax. Approximately two-thirds of county-levied property taxes are used for the support of public education. Municipalities levy a tax on property situated within the limits of the municipality for services provided by the municipality. The tax is paid by individuals, corporations and partnerships owning property within the state. Intangible personal property is exempt from taxation. There is no inheritance tax.

All content from Kiddle encyclopedia articles (including the article images and facts) can be freely used under Attribution-ShareAlike license, unless stated otherwise. Cite this article:
South Carolina government and politics Facts for Kids. Kiddle Encyclopedia.