Nancy Ruth Mace (born December 4, 1977) is an American politician serving as the U.S. representative for South Carolina's 1st congressional district since 2021. Her district includes much of the state's share of the East Coast, from Charleston to Hilton Head Island.

In 1999, Mace was the first woman to graduate from the Corps of Cadets program at The Citadel. From 2018 to 2020, she represented the 99th district in the South Carolina House of Representatives, covering Hanahan, northeast Mount Pleasant, and Daniel Island. Mace is the first Republican woman to be elected to Congress from South Carolina.

Mace worked on Donald Trump's 2016 presidential campaign. In 2021, she voted against impeaching Trump in relation to the January 6 attack on the U.S. Capitol, but nevertheless condemned his words and actions before, during, and after the attack. She also voted to hold Trump aide Steve Bannon in contempt of Congress for defying a subpoena to testify before the House Select Committee investigating the attack.

Mace was born at Fort Bragg, North Carolina, to United States Army officer James Emory Mace and schoolteacher Anne Mace. In 1999 she became the first woman to graduate from The Citadel's Corps of Cadets program, receiving a degree in business administration. Mace wrote In the Company of Men: A Woman at The Citadel (Simon & Schuster, 2001) about that experience.

In 2008, Mace started a consulting business called The Mace Group.

Mace campaigned for the Republican Party nomination for the United States Senate in South Carolina in the 2014 election. During the campaign, she opposed the Affordable Care Act, saying, "We must use any means possible to repeal, defund and ultimately stop Obamacare." Mace received 19,560 votes, or 6.2% of the total votes cast, in the Republican primary as incumbent Lindsey Graham re-won nomination.

On September 18, 2017, Mace filed as a Republican to run in a special election for the South Carolina State House District 99 seat being vacated by Jimmy Merrill, who resigned earlier that month after an indictment and plea deal for several ethics violations. She received 49.5% of the vote in the November 14 Republican primary, 13 votes short of winning the nomination outright. She defeated the second-place finisher, Mount Pleasant town councilman Mark Smith, in the November 28 runoff, 63–37%.

In May 2020, Governor Henry McMaster signed Mace's prison reform bill, which ends the shackling of pregnant mothers in prison, into law.

In June 2019, Mace announced that she would seek the Republican nomination for South Carolina's 1st congressional district, centered in Charleston, and at the time represented by Democrat Joe Cunningham. Cunningham had won the seat in 2018 in a surprise victory, winning a district Trump had carried by 13 percentage points two years earlier. Mace faced Mount Pleasant City Councilwoman Kathy Landing and Bikers for Trump founder Chris Cox in the June 9 Republican primary. During her primary campaign, she ran an advertisement stating she would "help President Trump take care of our veterans", and in which Vice President Mike Pence called her "an extraordinary American with an extraordinary lifetime of accomplishments—past, present and future." She won the primary with 57.5% of the vote.

In the November general election, Mace defeated Cunningham. She assumed office on January 3, 2021.

Mace did not vote to impeach President Trump, but she criticized him for his role in the January 6, 2021, attack on the U.S. Capitol. As a consequence, Trump endorsed former South Carolina representative Katie Arrington in the 2022 Republican primary for Mace's congressional seat. Mace defeated Arrington.

Mace was one of seven Republicans who publicly refused to support their colleagues' efforts to challenge the results of the 2020 presidential election on January 6, 2021. These seven signed a letter that, while giving credence to Trump's allegations of electoral fraud, said Congress did not have the authority to influence the election's outcome. Mace was so concerned by the hostile atmosphere Trump was generating in the District of Columbia that she sent her children home to South Carolina before the congressional vote to accept the Electoral College votes. After the 2021 United States Capitol attack, Mace pleaded with Trump to condemn it. While locked down in her Capitol office she told CBS News' Red & Blue host Elaine Quijano, "I'm begging the president to get off Twitter."

Mace, along with all other Senate and House Republicans, voted against the American Rescue Plan Act of 2021.

On May 18, 2021, Mace joined 61 other House Republicans to vote against the COVID-19 Hate Crimes Act, which condemned acts of hate against Asian-Americans and streamlined data collection and reporting about such occurrences. The bill previously passed the U.S. Senate on a 94–1 vote. Mace said she opposed the bill because it did not address discrimination against Asian-Americans in higher education.

An October 2021 profile in Politico magazine noted that Mace had worked on Donald Trump's 2016 campaign before disavowing him in the wake of the 2021 United States Capitol attack. She then softened her criticism of Trump before "slowly arcing her political trajectory back toward her post-Jan. 6 image as one of the few House Republicans skeptical of a Donald Trump-ruled GOP."

In April 2021, Mace voiced her opposition to a Democratic proposal to grant the District of Columbia statehood. She argued that D.C. was too small to qualify as a state, saying, "D.C. wouldn't even qualify as a singular congressional district."

In 2021, The Washington Examiner wrote that Mace "is a supporter of both religious liberty and gay marriage." Later that year, she told The Washington Examiner, "I strongly support LGBTQ rights and equality. No one should be discriminated against." She opposed the Equality Act, instead co-sponsoring a Republican alternative called the Fairness for All Act.

Mace was one of 31 Republicans to vote for the LGBTQ Business Equal Credit Enforcement and Investment Act. Mace was the lone Republican to sponsor H.R.5776 - Serving Our LGBTQ Veterans Act, legislation establishing a Center for Lesbian, Gay, Bisexual, Transgender, and Queer (LGBTQ) Veterans within the Department of Veterans Affairs. Among other functions, the center must serve as the department's principal adviser on adoption and implementation of policies and programs affecting veterans who are LGBTQ.

In July 2022, Mace was among 47 Republican Representatives who voted in favor of the Respect for Marriage Act, which would codify the right to same-sex marriage in federal law. Mace later stated, “If gay couples want to be as happily or miserably married as straight couples, more power to them. Trust me, I’ve tried it more than once."

In June 2021, Mace was one of 49 House Republicans to vote to repeal the Authorization for Use of Military Force Against Iraq Resolution of 2002.

During the 2021–2022 Russo-Ukrainian crisis, Mace wrote an article stating her opposition to military intervention in the conflict. She later said she was open to a partial No Fly Zone.

Mace voted for H.R. 7691, the Additional Ukraine Supplemental Appropriations Act, 2022, which would provide $40 billion in emergency aid to the Ukrainian government.

After the Robb Elementary School shooting in 2022, Mace called for bipartisan action on gun laws. She said, "If we can't even do the bare minimum, we're never going to keep our kids safe in school. Somewhere in the middle is the truth."

Mace opposed the first attempt to remove Liz Cheney as chair of the House Republican Conference, saying, "We should not be silencing voices of dissent. That is one of the reasons we are in this today, is that we have allowed QAnon conspiracy theorists to lead us." In early May, Mace appeared at fundraiser events with Cheney. During the second attempt to remove Cheney as chair, however, Mace voted to remove her.

In September 2021, Mace was among 135 House Republicans to vote in favor of the National Defense Authorization Act of 2022, which contains a provision that would require women to register for the draft.

On October 21, 2021, Mace was one of nine House Republicans who voted to hold Steve Bannon in contempt of Congress for defying a subpoena to appear before the United States House Select Committee on the January 6 Attack. Explaining her vote, Mace said she was being "consistent" and wants "the power to subpoena" in the event that Republicans regain control of the House of Representatives in 2022.

Mace resides in Charleston, South Carolina, on Daniel Island. She has two children with her ex-husband Curtis Jackson, whom she divorced in 2019. Mace was previously married to Chris Niemiec.

On June 1, 2021, the Charleston Police Department opened an investigation after Mace's home was vandalized with profanity, three Anarchy symbols, and graffiti in support of the PRO Act. 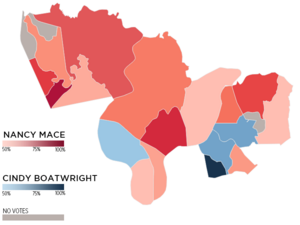 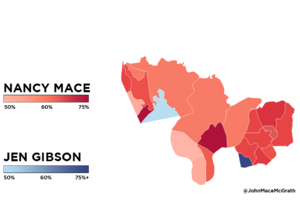 All content from Kiddle encyclopedia articles (including the article images and facts) can be freely used under Attribution-ShareAlike license, unless stated otherwise. Cite this article:
Nancy Mace Facts for Kids. Kiddle Encyclopedia.