The Granada War Relocation Center, also known as Camp Amache, was a Japanese American concentration camp located in southeast Colorado, about a mile west of the small farming community of Granada, south of US 50.

The camp was listed on the National Register of Historic Places on May 18, 1994, and designated a National Historic Landmark on February 10, 2006.

Following the Japanese attack on Pearl Harbor on December 7, 1941, President Franklin D. Roosevelt authorized the forced relocation of Japanese Americans living on the West Coast with Executive Order 9066. Over the spring of 1942, some 120,000 Japanese Americans were "evacuated" and placed into temporary "assembly centers" before being transferred to more permanent and isolated "relocation centers" like Granada. Run by the War Relocation Authority, the government body responsible for administration of the incarceration program, Granada was one of ten such camps, the only one to be built on private land. The camp site covered 10,000 acres (40 km2), of which only 640 acres (2.6 km2) was used for residential, community and administrative buildings, while the rest was devoted to agricultural projects. The land was owned by several ranchers and farmers before the war, and only one of these property owners willingly sold his acreage to make way for the camp, creating tension between the WRA and the other landholders, whose parcels were taken via condemnation. However, this did not necessarily translate to overall resistance to Japanese Americans being housed in the area: Colorado Governor Ralph Lawrence Carr was one of the few to welcome the Japanese Americans and the only governor not to oppose the establishment of a WRA camp in his state, going against the anti-Japanese sentiment of the times. 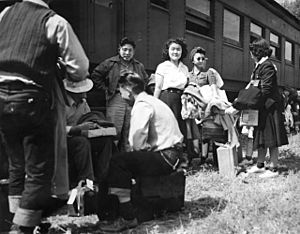 Granada opened August 27, 1942, and reached a peak population of 7,318 persons by February 1943, making it the smallest of the WRA camps (although the total number who passed through the camp during its three-year existence was over 10,000). Nearly all of the camp's original internees came from California: southwest Los Angeles, the Central Valley and the northern coast. Many had been residents of the Yamato Colony, a farming settlement established by Issei businessman Kyutaro Abiko. Each person was only allowed to bring one bag, therefore, many people were forced to sell what they could or give away their possessions, including pets, before being forced out. 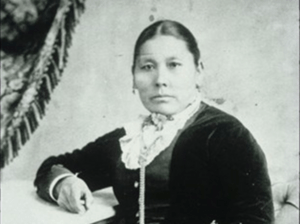 The camp's unofficial name quickly became Camp Amache, named after a Cheyenne chief's daughter, Amache Prowers, the wife of John Wesley Prowers. (The county where Camp Amache is located is named after Prowers.)

The Camp Amache residential area is spread atop a low hill, which prevented the flooding and mud problems which plagued other WRA camps, although the area was prone to high winds and severe dust storms. It was surrounded by barbed-wire fencing, with eight machine-gun towers located all around the camp. However, all eight towers were rarely manned at one time, and the guns were never used. The Project Director, James G. Lindley, allowed internees to take day trips to the town of Granada, located within walking distance of the camp, and although some locals remained hostile to their "Jap" neighbors, most eventually warmed to the internees, with many business owners hiring Japanese Americans and stocking goods catered to their Amache customers.

Although relations with the residents of Granada and other nearby communities were largely positive, many Coloradans protested the construction of Amache High School in 1943. The region was still recovering from the Depression of the 1930s, and citizens argued their tax dollars should not go to support Japanese American students. Echoing widespread rumors that the WRA was "coddling" confined Japanese Americans while the rest of the country suffered from wartime shortages, U.S. Senator Edwin C. Johnson called it an example of "pampering" the enemy. The high school was completed in June 1943, but plans to construct two additional schools for elementary and junior high students were abandoned; middle schoolers shared the Amache High building with older students, while elementary school classes continued in a barracks in Block 8H.

Sources indicate that the high school football team lost one game in three years. One noteworthy event was when the Amache football team played the undefeated football team from Holly, Colorado, which is located just 11 miles (17.7 km) east of Amache on U.S. 50. This game was unique because Holly actually agreed to come up to the camp and play Amache on their home field. One of the Holly team players was Roy Romer, who went on to become Governor of Colorado. The Amache team won this game by a score of 7-0, the only touchdown coming from a trick play, thus the Amache team can claim to be undefeated on their own field.

Adults in camp had various opportunities for employment. The camp had a police department which was worked by sixty Japanese American internees, although it was headed by a white security officer. Similarly, the Amache Fire Department consisted of three crews of Japanese American firefighters and one internee fire chief working under white supervisors. Some (though not many) who had earned teaching credentials prior to their confinement were employed in the camp schools. A silkscreen shop was established in 1943, and its forty-five staff members created training materials and over 250,000 color posters for the U.S. Navy, in addition to calendars, program events and other personal-use items for camp residents. As in all the WRA camps, former doctors, nurses, dentists, and other healthcare workers found work at the camp hospital, although they were paid significantly less than their white coworkers — and fellow internees often pooled money to subsidize their low wages.

Most of the work in Granada was directed at agricultural production, however. Like most of the other WRA camps, the land surrounding the residential areas were devoted to farming and raising livestock. The WRA budget restricted the per-inmate food allotment to 45 cents a day, partly to avoid the complaints of "coddling" and partly because the camp was intended to be mostly self-sufficient in its food production. These efforts proved especially successful at Granada, where internee laborers produced enough to feed the entire camp population and send the surplus to the U.S. Army and other camps. (In 1943, for example, Granada farmers grew 4 million pounds of vegetables.) 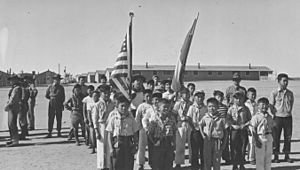 Internee leaders set up a separate Amache District for Boy Scouts at the camp. These Scouts still flew the American flag, notwithstanding the treatment they and their families had received from the government, as seen in the photograph at left of a Boy Scout Memorial Day parade at the camp.

In June 1942, the War Department authorized the formation of the 100th Infantry Battalion consisting of 1,432 men of Japanese descent in the Hawaii National Guard and sent them to Camps McCoy and Shelby for advanced training. Because of its superior training record, the Army's previous restrictions against Nisei (listed as enemy aliens ineligible for active service after Pearl Harbor) were lifted in order to create the 442nd RCT in January 1943 when 10,000 men from Hawaii signed up with eventually 2,686 being chosen along with 1,500 from the mainland. The 100th Infantry Battalion entered combat in September 1943 and it became known as the Purple Heart Battalion because of their heroism and horrific casualties. It was joined by the 442nd RCT in June 1944 and together it lived up to the motto "Go For Broke" because of the degree to which its soldiers risked their lives in battle and became the most highly decorated unit in the war and to this day, for its size and length of service. Eventually, 441 Nisei joined the U.S. Army from this camp, either volunteering or accepting their conscription into the famed 100th/442nd and MIS.In the southwest corner of the camp is a small cemetery and memorial dedicated to the Japanese Americans from there who volunteered to fight in Europe in World War II. A large stone memorial with men's names engraved in it sits in the cemetery in memory of those who died defending the U.S. The graves at the cemetery are only of children who died while at the camp. 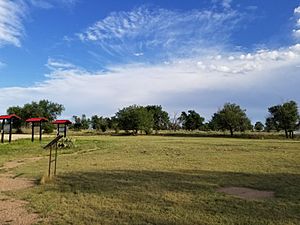 Today the camp is a lonely, desolate place on the high prairie, covered by scrubby vegetation and small cacti. All but one of the buildings were removed, many having been sold at auction and hauled off. The sole remaining original building is a pumphouse beside the main water tank, both of which are still in use. Cement foundations of most of the buildings remain, and the site is largely undisturbed, though the land was sold at auction (rather than being returned to the original owners). Signs have been posted to show locations of schools, laundries, dining halls, clinics, fire station, etc. The highway signs identify the site only as Camp Amache.

Since 1990, the Amache Preservation Society, a Granada high school group, has worked on preservation of the site and its documents. As a school project, Granada Undivided High School students have set up a museum for the Granada War Relocation Center.

All content from Kiddle encyclopedia articles (including the article images and facts) can be freely used under Attribution-ShareAlike license, unless stated otherwise. Cite this article:
Granada War Relocation Center Facts for Kids. Kiddle Encyclopedia.