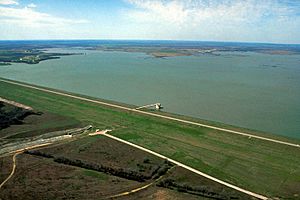 Granger Lake is a United States Army Corps of Engineers reservoir on the San Gabriel River in central Texas in the United States. The lake is located near the towns of Granger, Texas and Taylor, Texas in Williamson County. The dam, lake, and all adjacent property are managed by the Fort Worth District of the U.S. Army Corps of Engineers. The reservoir was officially impounded in 1980, and serves to provide flood control for the communities downstream. Granger Lake is a popular recreational destination.

Granger Lake has been stocked with species of fish intended to improve the utility of the reservoir for recreational fishing. Fish present in Granger Lake include catfish, white bass, and crappie.

All content from Kiddle encyclopedia articles (including the article images and facts) can be freely used under Attribution-ShareAlike license, unless stated otherwise. Cite this article:
Granger Lake Facts for Kids. Kiddle Encyclopedia.