Hypolimnas bolina, the great eggfly, common eggfly or in New Zealand the blue moon butterfly is a species of nymphalid butterfly found from Madagascar to Asia and Australia.

H. bolina is a black-bodied butterfly with a wingspan of about 70–85 millimetres (2.8–3.3 in). The species has a high degree of sexual dimorphism. The female is mimetic with multiple morphs.

Males are monomorphic. The dorsal wing surface is jet black but features three prominent spots, two on the forewing and one on the hindwing. To a human observer these appear as white spots fringed with blue-violet. They actually consist of a white center overlain by bright ultraviolet iridescence, a colour generated by nanostructures on the wing scale surface. Numerous smaller white spots fringe the fore- and hindwings. The ventral surface lacks any ultraviolet iridescence and consists essentially of banded white markings set against a brownish background.

Females are highly variable in dorsal appearance owing to the presence of both genetic polymorphism and phenotypic plasticity. Polymorphism is expressed primarily on the dorsal surface, with morphs varying in the presence of white, orange and blue markings. One genetic morph, named euploeoides by Clarke & Sheppard (1975), is thought to present a mimic of one or several members of the genus Euploea. The female ventral wing surfaces are similar to those of the male. Phenotypic plasticity is such that individuals are generally darker if they develop under cooler temperatures. 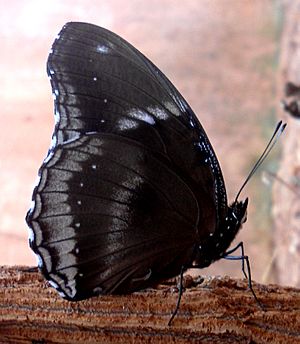 H. bolina is found in Madagascar in the west, through to South and Southeast Asia, Cambodia, the South Pacific islands (French Polynesia, Tonga, Tuvalu, Samoa and Vanuatu), and occurs in parts of Australia, Japan, and New Zealand. Appearances in New Zealand appear to be linked with favourable winds during April–June migratory periods in Australia, with the butterfly being recorded in 1956, 1971 and 1995. No populations have established locally in New Zealand.

H. bolina is a generally common butterfly across most tropical and sub-tropical habitat types, including wet/dry woodland (such as tropical savanna), rainforest and shrubland. It is a common visitor to suburban back yards and other areas of human disturbance. In the Australian tropics, H. bolina is particularly common along tracks, streambeds, and the corridors formed between remnant gallery forest and cultivated sugar cane fields. Both sexes are invariably found in association with one or more larval hostplant species, especially disturbance species such as Synedrella nodiflora, Sida rhombifolia, and Commelina cyanea.

To the west the female is monomorphic, mimicking species of the oriental and Australasian danaid genus Euploea. Eastwards H. bolina is frequently polymorphic and most forms are then non-mimetic. In areas where it resembles Euploea the butterfly has usually been designated a Batesian mimic.

Males are notably territorial. Individuals are known to return to defend the same location for up to 54 days, with site fidelity increasing with age. Territories that enhance the visual detection of adult females are preferred.

Unlike congenerics such as Hypolimnas anomala, female H. bolina most often lay one or two eggs at a time. These are typically laid on the leaf underside. Early season (post-diapause) females in the Australian wet-dry tropics target freshly-germinated seedlings of their favoured host in this region, Synedrella nodiflora. Eggs hatch after 3 days under a constant incubation temperature of ca. 25 degrees C. Newly hatched larva first consume their egg shell before feeding on the leaf upon which they were laid. Later larval instars are highly mobile and readily disperse in search of new host foliage. Individuals rarely pupate on (or in the immediate vicinity of) their host plant.

Other hosts include Elatostema cuneatum, Fleurya interrupta, Pseuderanthemum variabile, and Synedrella nodiflora. They are also known to feed on Urtica dioica and Malva species. While in New Zealand, adult butterflies have been observed feeding on the nectar of Lantana, Grevillea, Hebe, Symphyotrichum novi-belgii and Solanum muricatum plants.

The eggs are a pale, glassy green with longitudinal ridges except on the top.

After about four days the eggs hatch. The caterpillars immediately disperse. They are black with an orange head. The last segment is also orange. The head bears a pair of long branched black horns. The body surface is also covered with long, branched, orangish black spines. These spines look whitish and transparent immediately after moulting, but soon become the usual orange. In later instars the spiracles are surrounded by thin, dirty orange rings. Infection by Wolbachia bacteria is known to exclusively kill male specimens.

The pupa is suspended by just one point. It is brown with a grey tinge on the wings. The abdominal segments have distinct tubercles. The surface of the pupa is rough. The butterfly emerges after seven to eight days as pupae (female development is always a bit longer).

On the Samoan Islands of Upolu and Savai'i, a parasite (probably Wolbachia) had been killing the male members of Hypolimnas bolina. The problem was so severe that by 2001, males made up only 1% of the population. However, in 2007, it was reported that within a span of just 10 generations (about 5 years), the males had evolved to develop immunity to the parasite, and the male population increased to nearly 40%. This evolutionary event involved changes at a single genomic region on chromosome 25, and represents one of the fastest examples of natural selection observed to date in natural populations. Ed Yong has written a popular science account of this highly unusual evolutionary event.

All content from Kiddle encyclopedia articles (including the article images and facts) can be freely used under Attribution-ShareAlike license, unless stated otherwise. Cite this article:
Great eggfly Facts for Kids. Kiddle Encyclopedia.