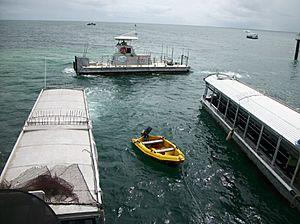 Glass bottom boats and a Semi submarine at Green Island 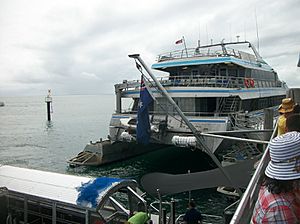 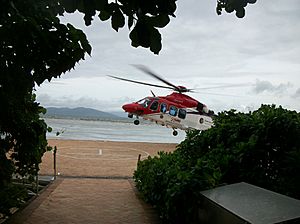 Green Island (originally Dabuukji) is a coral cay 27 km (17 mi) offshore from Cairns, Queensland, Australia located within the Great Barrier Reef Marine Park World Heritage Area. The island is surrounded by coral reef and protected in the Green Island National Park. Most visitors come for the day. A luxury resort with 46 rooms is situated on the island.

The island was formed approximately 6,000 years ago by waves depositing sand, coral and other debris onto its coral foundations.

Today the island supports a range of vegetation, including dry coastal/beach plants and a vine thicket rain forest. There are no natural freshwater springs on the island so all vegetation relies on rainwater and a small freshwater lens located under the island.

The local Aboriginal people (particularly Dick Moses, speaking Yidinyji) have reported that some time back in the past (in time immemorial) Dabuukji (Green Island) was approximately four times the size it is now. The present coral cay is only the north-east portion of the whole, original island.

Local Aboriginal language speakers (Roy Banning, Robert Patterson, and Henry Fourmile) advised and confirmed the Gungganyji language group are especially connected with Green Island. To them it is named Dabuukji, being "..the place of the hole in the nose".

Dabuukji, as a name, may refer to the island having been within local Aboriginal mythology and history a larger island with a freshwater marsh or 'hole' (later a well) at its centre. Alternatively it may be a reference to the story of the turtle which first obtained holes in its nose (nostrils) on this coral cay. It may also be a reference to some aspect of young Gungganyji male initiation rituals reported to have been conducted on this coral cay in times past. There is a strong chance the name alludes to all three of the above, in combination.

Whatever the case may be, all local Aboriginal language speakers appear to have grown up with the understanding the coral cay was a place to be generally avoided, being wunjami, that is, "a place haunted by spirits".

The State of Queensland has listed 'Green Island' as the cay's official name, this being the name given it by Lieutenant James Cook on 10 June 1770, either because of the appearance of the coral cay's vegetation, or possibly after Charles Green, who was an astronomer aboard the Endeavour at the time.

The first person to reside on the island was J.S.V. Mien in 1857. Coconut palms were planted on the island in 1899 to provide food for shipwrecked sailors.

Since the early 20th century, tourism has been the main activity on the island. A guest house was originally built in the 1930s and an underwater observatory was installed in 1954. The current resort, Green Island Reef Resort, was opened in 1994.

A seawater desalination plant was commissioned to supply water to the resort in 2001. The plant supplies 55 kL/d of potable water, and returns waste brine to the sea.

Commercial charter boats, helicopter and seaplane services all provide transport to the island. The island is reachable by a 45-minute catamaran ride from the mainland city of Cairns.

All content from Kiddle encyclopedia articles (including the article images and facts) can be freely used under Attribution-ShareAlike license, unless stated otherwise. Cite this article:
Green Island (Queensland) Facts for Kids. Kiddle Encyclopedia.