Greentown is a town in Liberty Township, Howard County, Indiana, United States. Located approximately 9 miles east of Kokomo on State Road 22 / US 35, it is home to the Howard County Fair Grounds. The town was platted in 1848, and incorporated as a town in 1873. Known for its collectible glassware made for only a few years by a local factory destroyed in 1903, it is home to the Greentown Glass Museum. As of the 2010 census, the town's population was 2,415.

Greentown was laid out in 1848 on the site of a former Native American village. Its inception was largely due to the need for a nearby trading post by people living in the area. First was a merchant, L. W. Bacon who built a log house on the northeast corner of Main and Merdian. Next was C. O. Fry who built on the southwest corner of the intersection. Just prior to the establishment of these local stores, around 1840 the Miami tribe of the Algonquin native peoples had a population in Howard county of about two hundred. There was an established village where South Kokomo is located, as well as villages south of present-day Cassville and Greentown. The frequently traveling paths were from Kokomo to Peru by way of the village of Cassville, and from Kokomo to Meshingomesia by way of a village south of Greentown.

There are a few different versions of how Greentown received its name. One of the more obvious versions would be that Greentown was an area of luscious green grass. Another version deals with the fact that before the town was incorporated that land was a part of a former township named Green Township. Green Township formed into both Liberty, and Union Townships in 1860, and so even though Greentown wasn't incorporated until the 1870s people were still living there when it was Green Township, and may have possibly all opted to preserve Green Township in some way by naming their town after it. One other version is based on the idea of Greentown being an Indian settlement named after a Native American chief called Green.

Greentown was incorporated some time between 1870 and 1880 as it first appeared on the US census in 1880. The population started out at just over 200, and quickly reached a thousand. Over the years ever since Greentown's population numbers have seen huge gains every couple census' followed by tiny drops between those which has been enough for the town to slowly grow over time, and has near 2,500 people since the 1990s. Greentown is expected to annex more land when the sewage treatment plant is fixed which is expected to bring forth another gain again soon.

The Hy-Red Gasoline Station was listed on the National Register of Historic Places in 1983.

Greentown’s first natural gas well came in 1877, and was located near the railroad on the west side of town. In years later to come, D.C Jenkins founded the glass manufacturing plant, Indiana Tumbler and Goblet Factory. The company was sold in 1899 to the National Glass Company. This company was fully operation up until 1903 when a fire took the building. The National Glass Company created glassware which is highly desirable today. The glass factory brought many jobs to the area and marked the town’s main period of industrial activity. When the factory burned down and the natural gas supply drastically declined, Greentown’s population dropped by about ten percent and the town as a whole suffered severe loss of revenue. However, the town has since doubled in size of its industrial peak. [1]

Greentown is home to two public libraries, one in the elementary building and the other in the local high school. The libraries host many events in the community to get Greentown residents involved and interested in reading.

Following the passage of a law that permitted the seizure of lands for the purpose of building public roads, in 1869 the citizens undertook the building of two toll roads: the Kokomo and Greentown Gravel Road mostly on the south side of the Wildcat Creek finished in 1874 (today's 50 North), and the Kokomo Greentown Jerome Gravel Road on the north finished in 1871 (today's Sycamore Road). These two roads joined on 50 North and 780 East and came together into Greentown. By the early 1900s the toll gates were retired.

In modern times there is Main Street that doubles as several highways, Meridian Street as the main north and south road. That is where historic downtown Greentown is centered, and the Howard County Fair is down Meridian Street just north of Greentown. Walnut Street is the street the Elementary School is on, and Harrison Street is the street Eastern Junior & Senior High School is on, the football stadium is on the corner of Walnut Street, and Harrison Street.

Greentown first appeared on the census in 1880. In 1870 the only three towns listed in Howard County were Kokomo, Russiaville, and New London. In 1880 New London vanished and Greentown was listed instead. Soon after Greentown being incorporated its population was instantly double that of Russiavilles', and the population quickly exploded to over a thousand people in just twenty years

There were 964 households of which 34.4% had children under the age of 18 living with them, 49.5% were married couples living together, 14.3% had a female householder with no husband present, 3.1% had a male householder with no wife present, and 33.1% were non-families. 29.9% of all households were made up of individuals and 14.1% had someone living alone who was 65 years of age or older. The average household size was 2.40 and the average family size was 2.97. 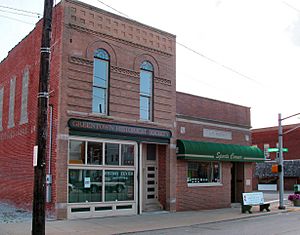 There were 995 households out of which 37.1% had children under the age of 18 living with them, 56.0% were married couples living together, 11.7% had a female householder with no husband present, and 29.3% were non-families. 27.5% of all households were made up of individuals and 14.0% had someone living alone who was 65 years of age or older. The average household size was 2.49 and the average family size was 3.02.

All content from Kiddle encyclopedia articles (including the article images and facts) can be freely used under Attribution-ShareAlike license, unless stated otherwise. Cite this article:
Greentown, Indiana Facts for Kids. Kiddle Encyclopedia.