Hartford City is a city in the U.S. state of Indiana, and the county seat of Blackford County. Located in the northeast central portion of the state, the small farming community underwent a dramatic 15-year economic boom beginning in the late 1880s. The Indiana Gas Boom resulted from the discovery and exploitation of natural gas in the area. The rural economy was transformed to one that included manufacturing. The boom attracted workers and residents, retail establishments, and craftspeople. The increased population was a catalyst for the construction of roads, schools, and churches. After the boom came a long period of growth and stability. Agriculture (and agricultural trade) remained as the basis for the economy.

From the 1920s through the 1970s, Hartford City continued to thrive. Agricultural automation and consolidation of small farms into industrial-size farms resulted in a decline in the population; the small farmer became unable to compete and fewer laborers were needed. Some workers turned to the manufacturing and construction sectors for employment in nearby cities. However, manufacturing hubs such as Muncie and Marion suffered the collapse of their economies during industrial restructuring when large factories closed. Despite the decline, Hartford City was able to retain the paper company, 3M.

The city government has concentrated on bringing manufacturing to Hartford City and has had some success in securing state funding for businesses that use recycled or agricultural materials in the manufacturing process. Younger people leave to attend college and pursue professional careers outside the scope of those available in Hartford City. Community college, private colleges, and a university are within commuting distance; however, Hartford City lacks rental housing appropriate to college students or young adults. The town's population was 6,220 at the 2010 United States Census.

Hartford City, Indiana began in the late 1830s as a few log cabins clustered near a creek. Folklore taught in local elementary schools suggested that Hartford City was originally a place to cross Lick Creek, known as “Hart’s ford.” This evolved to Hartford, and was eventually changed to Hartford City to avoid confusion with another Hartford located within the state. The community became the county seat of Blackford County. During the last half of the 19th Century, East Central Indiana consisted mostly of rural farming communities, including Hartford City. The town's population did not exceed 2,000 until after 1887, when the region began to grow because of the Indiana Gas Boom. 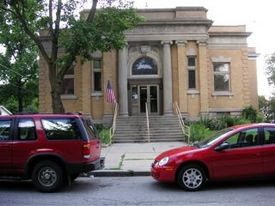 The 2009 official web site of Hartford City shows three main pictures: Civil War re-enactors, a basketball player, and the courthouse. Those pictures summarize what is important to the city and its culture. Hartford City’s town square is a “living museum”, and is listed on the National Register of Historic Places as the Hartford City Courthouse Square Historic District. Many of the buildings were built during the gas boom in the late 19th century, and are fine examples of architectural styles used at that time. Some of the architectural styles used are Romanesque Revival, Commercial Italianate, Renaissance Revival, and Queen Anne. The Blackford County Courthouse and First Presbyterian Church are also listed on the National Register of Historic Places. Adding to the historical atmosphere, the courthouse lawn contains war monuments on each corner. The town has a small museum and library housed in the Blackford County Historical Society building. The city’s main public library, the Hartford City Public Library, is a Carnegie library that began with funding from Andrew Carnegie in 1903.

History comes alive for three days in Hartford City each October, as the Blackford County Civil War Re-enactment Club has staged re-enactments, exhibits, and other entertainment for over twenty years. The club is also responsible for the addition of the Blackford County Civil War Memorial that rests on one of the corners of Hartford City's courthouse square.

Sports and recreation are important to the community. The city Parks Department maintains four parks. The city has also had a public swimming pool since the 1950s. Two golf courses have Hartford City addresses, three more are located within ten miles (16 km) from the center of Hartford City, and ten more are within 20 miles (32 km). The city has some small “lakes” and reservoirs available for fishing, such as Lake Placid and the lakes around the nearby Shamrock Lakes area. A larger lake with over 2,600 acres (11 km2) of water (Salamonie Lake) offers boating, fishing, and swimming – and is located within one hour’s driving time. State Parks nearby include Ouabache, Mounds, and Summit Lake. For those willing to drive north for about 90 minutes, Pokagon State Park is located on Lake James and Snow Lake. This park features campgrounds, hiking trails, a beach, the Potawatomi Inn, and a toboggan track. 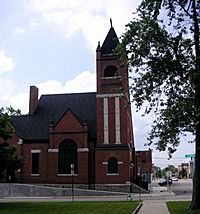 Agriculture has a strong influence on Hartford City’s culture. The main crops in the area are soybeans and corn. Some wheat and hay are also grown. The Indiana Farm Bureau office for Blackford County is located in Hartford City. 4-H, a youth organization associated with the U.S. Department of Agriculture has a strong presence. The county 4-H fair is held every June, and features a rodeo, horse show, dog show, livestock, a carnival, and more. The week-long event typically starts with a mile-long parade with a marching band and other participants.

The United Methodist Church has the biggest congregation in town. Other churches include Catholic, Church of the Nazarene, Christian, Lutheran, Wesleyan, Baptist, and Presbyterian. The Methodists, and then the Presbyterians, were the first to build churches in town. The historic First Presbyterian Church and the Christian Church were both built during the Gas Boom in the 1890s. 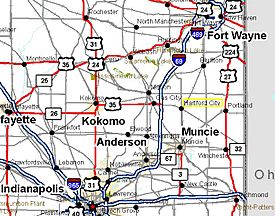 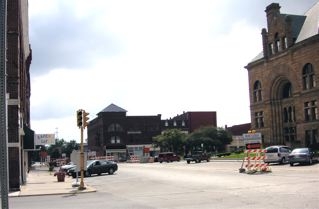 About 11 percent of Hartford City's male workers, and 9 percent of female workers, are employed in the transportation equipment industry. This makes the transportation equipment industry the most important provider of jobs for the city, although there are no auto parts plants located in the county. The decline of the auto industry has forced Hartford City to be less of a “bedroom community” reliant on jobs relating to automobile parts manufacturing in nearby cities, and more focused on developing businesses within the city. Currently, there are six businesses located in Hartford City that employ between 100 and 350 people, and none with more than 350 employees. Those six companies (in descending order of employees) are 3M Company, Petoskey Plastic, BRC Rubber Group, Inc., Blackford Community Hospital, and New Indy Paper Mill. In addition, there are nearly twenty more local entities with 25 to 100 employees. Agriculture also influences the town. Although they do not live in the city limits, farm families are involved with the local schools, parks, and social activities – and are consumers of the products of local merchants.

The state of Indiana has many college options available, including well-known universities such as Ball State University, Indiana University, Purdue, and Notre Dame. The state also has one of the largest private boarding high schools, the Culver Academies.

Hartford City has at least four universities located within 21 miles (34 km) of town. Ball State University is the largest and most well known, and is about 18 miles (29 km) away in Muncie, Indiana. (Ball State is named for the Ball brothers, who made much of their fortune with the Ball Corporation in the same Indiana Gas Boom that boosted Hartford City.) Muncie is also home to Ivy Tech State College-East Central. Private school Indiana Wesleyan University is about 21 miles (34 km) away, in Marion, Indiana. Another private school, Taylor University, is about 7 miles (11 km) away in Upland. Its location in Upland dates from 1893, attributed to the population boom in the area at the time, and is another example of the impact of the Indiana Gas Boom.

Blackford High School is located on the north side of Hartford City, and it has served the entire county since 1969. Enrollment for the 2008-2009 school year is 702 students, and 41 teachers are listed on the school roster. Hartford City High School was the town's high school prior to the 1969 consolidation of Montpelier High School. Hartford City Middle School is located on the town's west side, within easy walking distance from Sigma Phi Gamma Park. Students from grades 6 through 8 attend the middle school, and 23 teachers are listed on the roster. Students for grades 3 through 5 attend Northside Elementary School, and grades K through 4 attend Southside Elementary School. Hartford City also has a private school – Saint John's Riedman Memorial School is a private Catholic elementary school with approximately 60 students.

All content from Kiddle encyclopedia articles (including the article images and facts) can be freely used under Attribution-ShareAlike license, unless stated otherwise. Cite this article:
Hartford City, Indiana Facts for Kids. Kiddle Encyclopedia.