Montpelier is a city in Blackford County, Indiana, United States. This small rural community, the county's first to be platted, was established by settlers from Vermont, and is named after Vermont's capital city of Montpelier.

Montpelier was a central participant in the Indiana Gas Boom, as natural gas was discovered near the community in 1887. More importantly, the county's first successful oil well was drilled on the south side of Montpelier in 1890. Its population quickly grew from 808 in 1890 to about 6,500 by 1896. The Gas Boom, mostly an oil boom for Montpelier, gradually ended during the first decade of the 20th century. 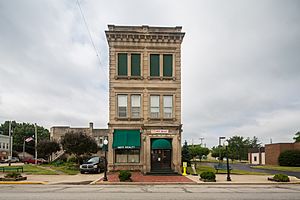 In 1836 and 1837, several groups of settlers from Vermont moved to East Central Indiana, and settled on the high ground on the south side of the Salamonie River. Abel Baldwin, a veteran of the War of 1812, was the leader of this group of Vermont natives. They named their community Montpelier, after the capital of their original home state. Baldwin and his son-in-law, civil engineer John Cook, surveyed the area in 1836, and it was platted on September 5, 1837. The original plat had 16 blocks with a total of 154 lots.

Beginning in September 1870, the Fort Wayne, Cincinnati & Louisville Railroad connected Fort Wayne with Muncie, Indiana, and Montpelier was (and still is) on this line. With dramatically improved transportation for the community, Montpelier became incorporated as a town at the end of 1870. By that time, the town had grown to a population of 231.

In 1887, natural gas was discovered in Blackford County, and the area began its participation in the Indiana Gas Boom. While natural gas was found throughout Blackford County, crude oil was found mostly in the county's Harrison Township, which includes Montpelier. Blackford County's first successful oil well, located just south of Montpelier, began producing during 1890. Montpelier was thought to be "the very heart of the greatest natural gas and oil field in the world". By the mid-1890s, about two-thirds of Harrison Township (25 square miles) was considered part of an oil-producing region. Montpelier became a city where “money and whiskey flowed frequently”, and numerous other “recreational activities” were available. Oil production from the Trenton Gas and Oil Field surrounding Montpelier began decreasing during the first decade of the 20th century, and the Gas Boom (or Montpelier's oil boom) gradually came to an end. Montpelier began a return to normalcy and its population (like many boom towns) has never exceeded its Gas Boom peak.

The Montpelier National Bank was robbed by three men on the afternoon of August 4, 1933. The robbery lasted about ten minutes, and no shooting was involved. The robbers quietly left town, driving east on Indiana State Road 18, without being followed. It was later determined, by the Federal Bureau of Investigation, that the robbers were John Dillinger and the Dillinger Gang.

Montpelier is part of East Central Indiana and Northern Indiana. Future Northern Indiana, including what became Harrison Township and Montpelier, was flattened by two glaciers millions of years ago. These glaciers are also responsible for the rich Blackford County farmland, which includes the land surrounding Montpelier.

Located in the Harrison Township portion of Blackford County, Indiana, Montpelier is adjacent to the Salamonie River. It is located 40 miles (64 km) south of Fort Wayne, Indiana, and 75 miles (121 km) northeast of Indianapolis.

Although Montpelier's peak population shown in the adjacent table (source: U.S. Census) is shown as 3,405, the city is thought to have had over 6,500 residents around 1896 during the Indiana Gas Boom.

There were 708 households of which 36.7% had children under the age of 18 living with them, 45.3% were married couples living together, 13.0% had a female householder with no husband present, 8.1% had a male householder with no wife present, and 33.6% were non-families. 29.4% of all households were made up of individuals and 11.3% had someone living alone who was 65 years of age or older. The average household size was 2.55 and the average family size was 3.10.

There were 802 households out of which 32.3% had children under the age of 18 living with them, 50.9% were married couples living together, 11.2% had a female householder with no husband present, and 32.7% were non-families. 29.3% of all households were made up of individuals and 12.7% had someone living alone who was 65 years of age or older. The average household size was 2.41 and the average family size was 2.95.

The Public Library of Montpelier and Harrison Township was built in 1907 and 1908. The building was made possible by a donation of $10,000 from philanthropist (and former business magnate) Andrew Carnegie. Built in the Classical Revival style of architecture, this building (under the historical name of Montpelier Carnegie Library) was added to the National Register of Historic Places in 2007. It is one of only three individual buildings in Blackford County listed in the National Register. (The county also has a Historic District.)

Montpelier's First Baptist Church was founded by Franklin Baldwin, brother of the leader of Montpelier's first settlers, Abel Baldwin. The congregation was organized in 1838. The present church building, located in downtown Montpelier, was constructed in 1907 and 1908. The building has been remodeled since that time.

The Montpelier Jamboree is an annual celebration that was first held in 1945. This Labor Day weekend celebration features musical acts, a Jamboree Queen contest, and other activities.

The former Godfroy Reservation, an Indian reservation for Chief Francis Godfroy and Miami Indians from 1827 until 1836, is located on the Salamonie River near Montpelier. (Francis is the English pronunciation of Godfroy's real name Francois. The Indian pronunciation of Francois was Palonzwa.) Godfroy's father was French, and his mother was from the Miami tribe. A big man at six feet tall and 300 pounds, Godfroy was the last war chief of the Miami Nation. A sculpture of an Plains Indian stands in downtown Montpelier, donated by Chief Larry Godfroy. The sculpture is best known as being seen in the introductory montage on the television program Parks and Recreation.

All content from Kiddle encyclopedia articles (including the article images and facts) can be freely used under Attribution-ShareAlike license, unless stated otherwise. Cite this article:
Montpelier, Indiana Facts for Kids. Kiddle Encyclopedia.