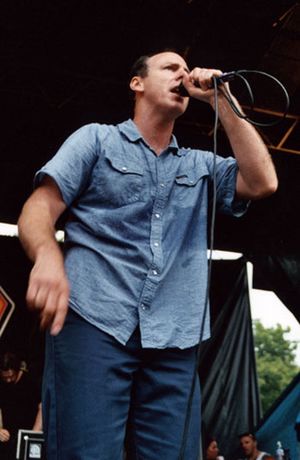 Gregory Walter Graffin, Ph.D. (born November 6, 1964 at Racine, Wisconsin), better known to the public as Greg Graffin, is the vocalist and a songwriter of Bad Religion, which he co-founded in 1980 and is the band's only constant member, even though it now features two of their original members, guitarist Brett Gurewitz (who left and rejoined the band twice) and bassist Jay Bentley (who left in 1982, but returned in 1986). Graffin obtained his Ph.D. at Cornell University and has lectured courses in life sciences and paleontology at the University of California, Los Angeles. He's also a solo artist, having released American Lesion in 1997 and Cold as the Clay in 2006.

All content from Kiddle encyclopedia articles (including the article images and facts) can be freely used under Attribution-ShareAlike license, unless stated otherwise. Cite this article:
Greg Graffin Facts for Kids. Kiddle Encyclopedia.