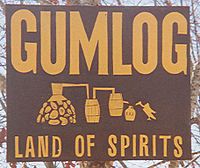 Gumlog is an unincorporated area and census-designated place in Franklin County, Georgia, United States. The population was 2,146 at the 2010 census.

Georgia Highway 328 is called Gumlog Road and is nearly the only way in and out of the community of Gumlog. It is 10 miles (16 km) long and crosses over the Gumlog Cove branch of Lake Hartwell. Gumlog Road runs from Highway 59 in Lavonia to a junction with Highway 17 in Avalon. Gumlog Creek also starts near the same junction in Avalon. Avalon was going to be named "Gumlog" after Gumlog Creek, but when the charter came back from the State Legislature, the name had been changed instead to Avalon.

There were 849 households out of which 26.1% had children under the age of 18 living with them, 61.6% were married couples living together, 7.8% had a female householder with no husband present, and 26.3% were non-families. 23.0% of all households were made up of individuals and 9.7% had someone living alone who was 65 years of age or older. The average household size was 2.39 and the average family size was 2.78.

In 1785, shortly after British rule, the Crackerhead State was roiling with scandal - where pigs would have died of disgust. In this tumultuous era, the Yazoo Land Scandal forced the federal government the take direct control from Georgia of what is now Alabama and Mississippi. South Carolina took advantage of the situation to move the boundary, established by King Charles II, from the main branch of the Keowee River to the Tugaloo branch. On top of that, there were many complaints of Indians stealing horses. The most pressing business of Franklin County's first court was to sort out the infamous Land Grant Fraud. Since there is no honor amongst thieves, over 5 million acres had been granted where only a half million actually existed. This situation was repeated in other Georgia counties. To sort out the legitimate deeds from the fraudulent deeds, a court was held on Gumlog Creek at the home of Warren Philpot. George Walton, a signer of the Declaration of Independence, was the Chief Justice. The assistant justices were Jesse Walton, Benjamin Cleveland, Larkin Cleveland, and John Gorham. These are prominent people in the development of Georgia. What today would be referred to as commissioners, or councilmen were referred to as judges in the past.

What is in a Name

The name "Gumlog" may come from a rough translation of the Native name Tsilula Yi or "Sweetgum Settlement". The area was a managed gum tree forest before Georgia exercised its right to expropriate Native lands. There may have been confusion at the time between the Native words for creek and log. Those doing the translating were not experts. In 1785 an important governmental meeting took place in Gumlog. The participants were provided improvised seating on gum logs. So it may have been spoken of as the Gum Log Court. Gumlog was the name given to a Georgia military district. These were militia companies of supposedly of one-hundred men in a similar manner of a Danish Wepntak ("Weapon Take") or English Hundred. The policy of the American and perhaps even that of the earlier British government was to favor Native, Spanish or French names and not to reuse names that belong to the British Isles. The Victorian word for this policy was euphonious to provide a better sense of place.

All content from Kiddle encyclopedia articles (including the article images and facts) can be freely used under Attribution-ShareAlike license, unless stated otherwise. Cite this article:
Gumlog, Georgia Facts for Kids. Kiddle Encyclopedia.