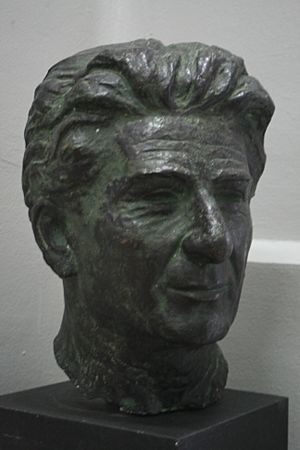 Hakob Karapetovich Kojoyan (1883 - 1959) was an Armenian artist. He worked in genres of painting, landscapes, and applied art. Hakob Kojoyan was awarded the designation of "People's Artist of the Armenian Soviet Socialist Republic." He helped Armenian architect Alexander Tamanian to create the coat of arms for the Democratic Republic of Armenia.

Hakob Kojoyan was born in Akhaltsikhe (now in Georgia) to a family of Armenian jewelers. As a boy he apprenticed to the goldsmith's craft and learned engraving. At age 20 he went to study art in Munich, Germany, and in 1905 went to the St. Petersburg Academy of Arts in Russia, where he studied for two years. He later spent time in Paris and Moscow, then in 1918 returned to Armenia.

All content from Kiddle encyclopedia articles (including the article images and facts) can be freely used under Attribution-ShareAlike license, unless stated otherwise. Cite this article:
Hakob Kojoyan Facts for Kids. Kiddle Encyclopedia.