Halcott is a town in Greene County, New York, United States. The population was 258 at the 2010 census. The town is in the southwestern corner of the county.

The first recorded settlers, the Valkenburg family, arrived around 1813, although some non-permanent settlers had attempted to live in the area about 1790. The town was established in 1851 from the town of Lexington. It was named for sheriff George W. Halcott.

According to the United States Census Bureau, the town has a total area of 23.0 square miles (60 km2), all of it land. 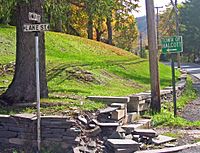 Halcott is in the Catskill Mountains. The west and south town lines are the border of Delaware County. The northern and eastern borders are the range of mountains from Bearpen Mountain to Halcott Mountain, beyond which lies the neighboring town of Lexington. The town of Halcott is basically the valley of Vly Creek, and ringed by mountains on three sides. Most access to the town is from the south, via the Delaware County village of Fleischmanns.

The pass between Bearpen and neighboring Vly Mountain is traversed by Halcott Mountain Road, an unimproved county highway which reaches 2,800 feet (850 m) at the col, making it the highest elevation free public through road in New York State. It is also the only route between Halcott and the rest of Greene County. Like Hardenburgh in nearby Ulster County, to reach the rest of the county via a paved road one must leave and go through a portion of either Ulster or Delaware counties.

Due to this geographic isolation, Halcott is the only place in Greene County whose telephones are in the 845 area code.

There were 84 households, of which 20.2% had children under the age of 18 living with them, 52.4% were married couples living together, 7.1% had a female householder with no husband present, and 35.7% were non-families. 28.6% of all households were made up of individuals, and 11.9% had someone living alone who was 65 years of age or older. The average household size was 2.30 and the average family size was 2.70.

Communities and locations in Halcott

All content from Kiddle encyclopedia articles (including the article images and facts) can be freely used under Attribution-ShareAlike license, unless stated otherwise. Cite this article:
Halcott, New York Facts for Kids. Kiddle Encyclopedia.