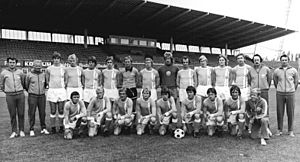 Hansa Rostock is a football club from Rostock, Mecklenburg-Vorpommern. The club plays in German 2. Bundesliga.

The club was founded on 1 November 1954 multi-sport Sportclub Empor Rostock. Because it was not possible to find enough players for the football team the team of Empor Lauter was transferred to Rostock. This was common in the German Democratic Republic. Rostock took the place of Lauter in the first league. The re-organization of East German sports in 1965 led to the association's football department becoming independent as Fußball Club Hansa Rostock. The new club was named "Hansa" to remember northern Europe's Hanseatic League. Rostock was an important member there.

After the reunification of Germany Hansa played together with Dynamo Dresden in the German Bundesliga. They were relegated but came back. Their best result in the Bundesliga was 2 times a 6th place.

All content from Kiddle encyclopedia articles (including the article images and facts) can be freely used under Attribution-ShareAlike license, unless stated otherwise. Cite this article:
Hansa Rostock Facts for Kids. Kiddle Encyclopedia.