Happy Camp (Karuk: athithúf-vuunupma) is a census-designated place (CDP) in Siskiyou County, California in the United States. Its population is 905 as of the 2020 census, down from 1,190 from the 2010 census. 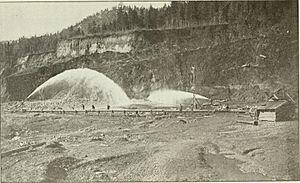 The town of Happy Camp "The Heart of the Klamath" is located on State Route 96, about 70 miles (110 km) west of Interstate 5 and 100 miles (160 km) northeast of Willow Creek. The town of Takilma, Oregon is accessible from Happy Camp (which is nearly 40 miles (64 km) away). The shortest route to Oregon, over the Grey Back pass, is a seasonal summer road and is not cleared or maintained in snowy conditions. The Forest Service, located in Happy Camp on SR 96, provides road closure information.

Happy Camp was so named by miners in early days of prosperity. It has frequently been noted on lists of unusual place names. H. C. Chester, who interviewed Jack Titus in 1882 or 83, states that Titus named the camp because his partner James Camp, upon arriving there, exclaimed "This is the happiest day in my life." Redick McKee mentions the camp on Nov 8, 1851, as 'Mr Roache's Happy Camp' at the place known as Murderer's Bar (Indian Report 1853:178)

The town of Happy Camp is also known as the "Gateway to the Marbles." There are many trail heads for this Wilderness Area within 10 miles (16 km) of the town for which the U.S. Forest Service provides trail information. The Marble Mountains cover thousands of acres, and contain almost a hundred lakes. Among the most interesting lakes are Spirit Lake, which contains a luminescent chemical and has been seen to "glow" in the dark; Ukonom Lake, which is very large and beautiful even though the area is recovering from fire damage; and the Green and Blue Granite Lakes, where trout swim in the cold and clear waters. Deer, bear, elk, and mountain lion are common in the Wilderness Area.

The community is the home of the Bigfoot Jamboree, an annual festival put on by the Happy Camp Community Council. Happy Camp is along the "Bigfoot Scenic Byway," an 89-mile stretch of California State Route 96 named by the United States Forest Service. The town is the home of an 18-foot-tall Bigfoot statue made out of recycled metal.

As typical of California, Happy Camp has a mediterranean climate. It is marked by very hot summer days, being shielded in the valley behind the mountains from the cooling Pacific influence affecting nearby coastal locations. The winters are much cooler than in inland locations further south, albeit still very mild compared to areas to the east of the continent. The dry and hot summers make the surrounding forest prone to wildfires, seen in a 2014 disaster, when it took months to extinguish an extensive fire that almost went up to the Oregon border. The high winter rainfall however, keeps the area greener than its summer climate would suggest. Average lows remain cool year-round, relieving the intense daytime heat and keeping the average July temperature at around 73 °F (23 °C) in sharp contrast to the 95 °F (35 °C) average highs.

The Karuk Tribe is headquartered in Happy Camp.

The U.S. Forest Service maintains an office in town. Happy Camp is the administration site for the Happy Camp/Oak Knoll Ranger Districts of the Klamath National Forest.

All content from Kiddle encyclopedia articles (including the article images and facts) can be freely used under Attribution-ShareAlike license, unless stated otherwise. Cite this article:
Happy Camp, California Facts for Kids. Kiddle Encyclopedia.