Harbor Beach is a city in Huron County in the U.S. state of Michigan. The population was 1,703 at the 2010 census.

There were 774 households, of which 24.0% had children under the age of 18 living with them, 43.8% were married couples living together, 11.2% had a female householder with no husband present, 3.6% had a male householder with no wife present, and 41.3% were non-families. 37.9% of all households were made up of individuals, and 22.2% had someone living alone who was 65 years of age or older. The average household size was 2.14 and the average family size was 2.80.

The earliest settlers to this area arrived in 1837 and established a sawmill for processing lumber. The settlement eventually was named Barnettsville in 1855, as the settlement continued to grow, the town was renamed Sand Beach. In 1899, the village of Sand Beach changed its name to Harbor Beach, because of the impression that the area has nothing but sand. In 1910, it was officially incorporated into a city.

Located on western shore of Lake Huron in the Thumb of Michigan, Harbor Beach is known as having the world's largest man-made fresh water harbor and boasts a fishing pier that is handicap accessible. The municipal marina provides transient services and shuttle services into the downtown area which has retained its old town charm.

The Murphy Museum and the Grice House Museum feature history of the area. Wagener County Park, just south on M-25, and North Park Campgrounds, across from the marina, offer complete camping facilities and groomed hiking and cross country ski trails.

The association known as HBRA was founded in 1896 as a summertime vacation spot in Harbor Beach. The resort is located roughly three hours north of Detroit, MI and is currently still operated, and frequented, by the 5th and 6th generation descendents of the original founding families. 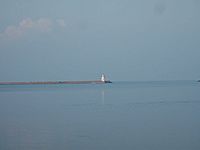 All content from Kiddle encyclopedia articles (including the article images and facts) can be freely used under Attribution-ShareAlike license, unless stated otherwise. Cite this article:
Harbor Beach, Michigan Facts for Kids. Kiddle Encyclopedia.