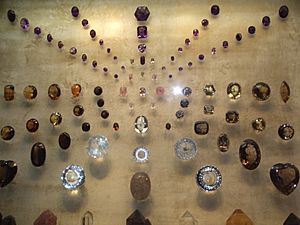 The Guggenheim Hall is an exhibit at the American Museum of Natural History on the Upper West Side in Manhattan, New York City, that hosts one of the world's largest geology collections. It focuses on petrology, mineralization and the anthropology of gems and minerals. It is the permanent home of the Star of India, one of the world's largest and most famous star sapphires. The New York Times architectural critic, Paul Goldberger, said, "It is one of the finest museum installations that any city has seen in many years". It operates under the museum's department of Earth and Planetary Sciences. 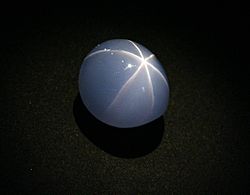 The Star of India, one of many gems stolen in a 1964 heist; it was later recovered from a bus locker.

The Harry Frank Guggenheim Hall of Minerals houses hundreds of unusual geological specimens. It adjoins the Morgan Memorial Hall of Gems showcasing many rare, and valuable gemstones. The exhibit was designed by the architectural firm of Wm. F. Pedersen and Assoc. with Fred Bookhardt in charge. Vincent Manson was the curator of the Mineralogy Department. The exhibit took six years to design and build, 1970–1976.

On October 29, 1964, the Star of India, along with the Eagle Diamond, the DeLong Star Ruby and the Midnight Star, were stolen from the Museum. The burglars, who included Jack Murphy, gained entrance by climbing through a bathroom window they had unlocked hours before the Museum was closed. The DeLong Star Ruby and the Midnight Star were both recovered. Weeks later, the Star of India was later recovered from a locker in a Miami bus station, but the Eagle Diamond was never found; it may have been recut or lost. The DeLong Star Ruby was recovered for a $25,000 ransom, paid by Florida businessman John D. MacArthur.

On display are many renowned samples that are chosen from among the Museum's more than 100,000 pieces. Among these are the Patricia Emerald, a 632 carat (126 g) stone that is considered one of the world's great emeralds for its size and color, and also because it is dihexagonal, or 12-sided. It was discovered in 1920 in a mine high in the Colombian Andes. The Patricia is one of the few large gem-quality emeralds that remains uncut. Also on display is the 563 carat (113 g) Star of India, the largest, and most famous, star sapphire in the world. It was discovered over 300 years ago in Sri Lanka, most likely in the sands of ancient river beds from where sapphires continue to be found today. It was donated to the Museum by the financier J.P. Morgan. The thin, radiant, six pointed star, or asterism, is created by incoming light that reflects from needle-like crystals of the mineral rutile which are found within the sapphire. The Star of India is polished into the shape of a cabochon, or dome, to enhance the star's beauty. Among other notable specimens on display are a 596-pound (270 kg) topaz, a 4.5 ton specimen of blue azurite/malachite ore that was found in the Copper Queen Mine in Bisbee, Arizona at the start of the 20th century; and a rare, 100 carat (20 g) orange-colored padparadschan sapphire from Sri Lanka, considered "the mother of all pads." The collection also includes the Midnight Star Ruby, a 116.75-carat deep purplish-red star ruby.

All content from Kiddle encyclopedia articles (including the article images and facts) can be freely used under Attribution-ShareAlike license, unless stated otherwise. Cite this article:
Harry Frank Guggenheim Hall of Gems and Minerals Facts for Kids. Kiddle Encyclopedia.