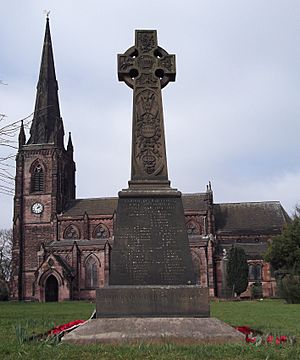 Hartshill is a township within the city of Stoke-on-Trent in the English county of Staffordshire.

Originally a Norman deer hunting park, which survived as such well into the 15th century. This later became a landed estate and farm. The valley side section of the park survived into the 20th century as a large area of woods and grassland - which is now reclaimed and run as a local nature reserve under the name of Hartshill Park.

The modern residential sections of Hartshill were developed by Herbert Minton (1793–1858) to serve as a dormitory suburb of Stoke town, and there are numerous fine listed buildings in the area which were commissioned by Minton and his sons. The southern end of Hartshill Park was home to a Catholic convent.

The ecclesiastical parish was created out of the parish of Stoke in 1842, when Holy Trinity church was built by George Gilbert Scott under the patronage of Herbert Minton. The apsidal ended chancel was completed at a later date, circa 1870.

Dominant in Hartshill is the Royal Stoke University Hospital, which was formed out of the City General Hospital, the North Staffordshire Royal Infirmary, the North Staffordshire Orthopedic Hospital and large central Accident and Emergency, Outpatients and Pathology Departments. Keele University's School of Medicine and School of Nursing and Midwifery operate the clinical part of their courses from a separate campus at the hospital. At 2012, the hospital has benefited from a £400 million refurbishment and upgrade. The area's air ambulance helicopter operates from Hartshill.

The famous author and scholar of Old English J.R.R. Tolkien regularly visited North Staffordshire during his long academic holidays, until his death in 1973. During these holidays he stayed with his son at the Presbytery in Hartshill Road.

All content from Kiddle encyclopedia articles (including the article images and facts) can be freely used under Attribution-ShareAlike license, unless stated otherwise. Cite this article:
Hartshill, Staffordshire Facts for Kids. Kiddle Encyclopedia.