A Heffalump is a type of elephant-like character in the Winnie the Pooh stories by A. A. Milne. Heffalumps are mentioned, and only appear, in Pooh and Piglet's dreams in Winnie-the-Pooh (1926), and seen again in The House at Pooh Corner (1928). Physically, they resemble elephants; Shepard's illustration shows an Indian elephant. They are later featured in the animated television series The New Adventures of Winnie the Pooh (1988–1991), followed by two animated films in 2005, Pooh's Heffalump Movie and Pooh's Heffalump Halloween Movie.

Although the fifth chapter of Winnie-the-Pooh is titled "In Which Piglet Meets a Heffalump", Piglet only actually meets a Heffalump in his imagination. In this chapter, Pooh and Piglet attempt bravely to capture a heffalump in a clever trap; however, no heffalumps are ever caught, and indeed they never meet a heffalump in the course of the books. The sole appearance of heffalumps in the books is imagined, as Pooh tries to put himself to sleep:

[H]e tried counting Heffalumps [but] every Heffalump that he counted was making straight for a pot of Pooh's honey ... [and] when the five hundred and eighty-seventh Heffalump was licking its jaws, and saying to itself, "Very good honey this, I don't know when I've tasted better", Pooh could bear it no longer.

In the third chapter of The House at Pooh Corner, Pooh and Piglet fall into a similar trap (it is implied it was the same trap) and think that it was made by a Heffalump to catch them. Pooh and Piglet rehearse the conversation they'll have when the Heffalump comes, but Pooh falls asleep and when Piglet hears a voice, he panics and says the wrong thing. He is mortified when the voice turns out to be that of Christopher Robin.

Although this is not explicitly stated, it is generally thought that heffalumps are elephants from a child's viewpoint (the word "heffalump" being a child's attempt at pronouncing "elephant"). E. H. Shepard's illustrations in A. A. Milne's original books depict heffalumps (as seen in Piglet's dreams) as looking very much like elephants.

In Disney's adaptations of the stories, Heffalumps are first mentioned in the 1968 featurette Winnie the Pooh and the Blustery Day, and seem to be a product of Tigger's imagination. They appeared with their partners, the woozles, in a song called "Heffalumps and Woozles". Here, Tigger described them as honey-eating elephants. In both the animated films and all subsequent television series, they are also depicted as looking like elephants, albeit slightly cuddlier and less fierce than those Pooh imagines in the books, with rabbit-like tails and stitches as would be found on a stuffed animal.

In the animated television series The New Adventures of Winnie the Pooh, most heffalumps are enemies of Pooh and his friends. They are known to steal honey and are often associated with woozles. One particular heffalump named Heff was the dim-witted sidekick of Stan the Woozle and was afraid of Roo because he thought Roo was a giant mouse.

Piglet befriended a young heffalump named Junior in two episodes of The New Adventures of Winnie the Pooh. Junior lived with his parents, and his father, Papa Heffalump, was voiced by Jim Cummings. Mama Heffalump often had to remind Papa Heffalump of his many allergies.

They and the song are also featured in the attraction at the Magic Kingdom in Walt Disney World, Disneyland, Hong Kong Disneyland and Shanghai Disneyland, also called The Many Adventures of Winnie the Pooh, where the riders travel through the heffalumps and woozles in Pooh's dream.

In a fantasy sequence in the 2018 film Christopher Robin, when the title character almost drowns in a Heffalump trap, he hallucinates seeing an actual elephant as a Heffalump. 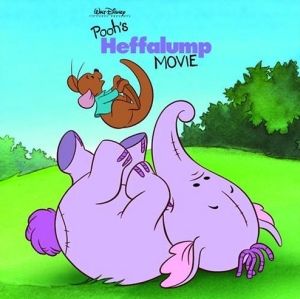 Lumpy the heffalump playing with Roo in a book that's based on Pooh's Heffalump Movie.

Since the 1950s heffalumps have gained notability beyond the Pooh stories.

All content from Kiddle encyclopedia articles (including the article images and facts) can be freely used under Attribution-ShareAlike license, unless stated otherwise. Cite this article:
Heffalump Facts for Kids. Kiddle Encyclopedia.