Herkimer is a town in Herkimer County, New York, United States, southeast of Utica. It is named after Nicholas Herkimer. The population was 10,175 at the 2010 census.

Herkimer was first settled around 1722, in an area originally called Stone Ridge, now the Village of Herkimer. Early settlers were primarily Palatine Germans.

Johan Jost Herchheimer, a farmer who also engaged in trade and transport on the Mohawk River, settled in the German Flatts District of Albany County, New York in 1725, on the south side of the Mohawk River, within the present day township of German Flatts, incorporated in 1788. He owned 5,000 acres (20 km2) of the land, including a strategic portage around Little Falls, where his eldest son Nicholas Herkimer established a farmstead. In 1788, the town of Herkimer, on the north side of the river, was incorporated and named after him.

During the French and Indian War, the Mohawk Valley was ravaged by raids of the French and their native allies. By 1770, Nicholas had established great wealth through farming and trade during the wars, and had also gained military experience as a captain of a Militia. He would later fight in the Battle of Oriskany.

The Town of Herkimer was established in 1789. 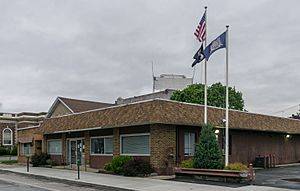 Communities and locations in the Town of Herkimer, NY

All content from Kiddle encyclopedia articles (including the article images and facts) can be freely used under Attribution-ShareAlike license, unless stated otherwise. Cite this article:
Herkimer (town), New York Facts for Kids. Kiddle Encyclopedia.