Hodgeman County (county code HG) is a county located in the U.S. state of Kansas. As of the 2020 census, the county population was 1,723. Its county seat and most populous city is Jetmore.

Hodgeman County was founded in 1867. It was named for Amos Hodgman, member of the 7th Regiment Kansas Volunteer Cavalry. The letter E was later added to the namesake's name. 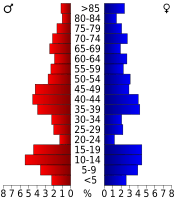 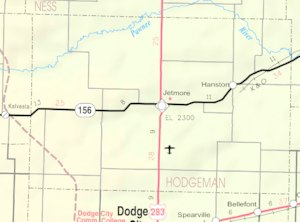 Hodgeman County is divided into nine townships. None of the cities within the county are considered governmentally independent, and all figures for the townships include those of the cities. In the following table, the population center is the largest city (or cities) included in that township's population total, if it is of a significant size.

At the beginning of the 1992 film Unforgiven, the protagonist William Munny, played by Clint Eastwood, is living in Hodgeman County and working as a pig farmer, while attempting to hide evidence of his violent past from all those around him.

All content from Kiddle encyclopedia articles (including the article images and facts) can be freely used under Attribution-ShareAlike license, unless stated otherwise. Cite this article:
Hodgeman County, Kansas Facts for Kids. Kiddle Encyclopedia.