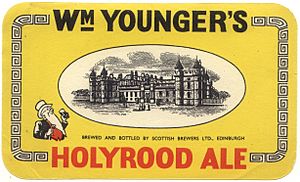 Brewing was the main local industry in the 19th and 20th centuries.

Holyrood ( Scots: Halyruid, Scottish Gaelic: Taigh an Ròid) is an area in Edinburgh, the capital of Scotland, lying east of the city centre, at the foot of the Royal Mile.

The area originally took its name from Holyrood Abbey, which was the Church of the Holy Rude (Scots for 'Holy Cross').

All content from Kiddle encyclopedia articles (including the article images and facts) can be freely used under Attribution-ShareAlike license, unless stated otherwise. Cite this article:
Holyrood, Edinburgh Facts for Kids. Kiddle Encyclopedia.