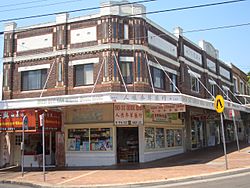 Homebush West is a suburb in the Inner West of Sydney, in the state of New South Wales, Australia. Homebush West is located 16 kilometres west of the Sydney central business district, in the local government area of the Municipality of Strathfield. Homebush and Homebush Bay are separate suburbs to the east and north-east.

This area was originally known Liberty Plains but was called Flemington by John Fleming, who was granted 200 acres (0.81 km2) here in 1806. The bush was turned into paddocks and later was the site of a cattle saleyard. In the early 1970s, the Sydney Markets were built at Flemington to relieve the Paddy's Markets at Haymarket, in the city. Since the establishment of Sydney Markets at Flemington in 1975, the residential part of the suburb, south of the railway line became known as Homebush West.

Homebush was established in the 1800s by the colony's then assistant surgeon D'arcy Wentworth. According to local government historian Michael Jones, "Wentworth is popularly credited with having called the area after his 'home in the bush', although Homebush is also a place in Kent."

Homebush West is serviced by Flemington railway station, on the Airport, Inner West & South Line of the Sydney Trains network.

All content from Kiddle encyclopedia articles (including the article images and facts) can be freely used under Attribution-ShareAlike license, unless stated otherwise. Cite this article:
Homebush West Facts for Kids. Kiddle Encyclopedia.