Honokaa is a census-designated place (CDP) in the Hamakua District of Hawaii County, Hawaii, United States. The population was 2,233 at the 2000 census.

According to the United States Census Bureau, the CDP has a total area of 1.3 square miles (3.4 km2), all of it land.

There were 761 households out of which 29.2% had children under the age of 18 living with them, 54.1% were married couples living together, 14.5% had a female householder with no husband present, and 25.9% were non-families. 23.1% of all households were made up of individuals and 14.1% had someone living alone who was 65 years of age or older. The average household size was 2.88 and the average family size was 3.37.

Honokaa's economy was based primarily on the sugar production of the Hāmākua Sugar Company from 1873 to 1994. With the closing of the Honokaa sugar production and the most recent staggered tourism, the local economy has been in decline. It has become increasingly a bedroom community for Hilo. As the gateway to the Hāmākua Coast, Honokaa provides the first unobstructed view of the Pacific Ocean traveling downslope from Waimea.

The Hāmākua Coast was the classic plantation community in the early 20th century, but since the closing of The Big Island's sugar industry, the district has had to diversify its economy. Presently, much of the district is still zoned for agriculture, Hāmākua has seen rising prospects in other crops including pineapples, coffee, papaya, macadamia nuts, and tea.

Honokaa is the home of the fourth Governor of Hawaii since statehood, John D. Waihee III, who served from December 2, 1986 to December 2, 1994. Waihee is the first Native Hawaiian to hold that office anywhere in the United States.

Honokaa boasts a historic downtown district. In 1930, The Honokaa People's Theatre was built on Māmane Street by the Tanimoto family. Since 1993, the theater had hosted the Hāmākua Music Festival every Fall. Proceeds went to fund local music education on the Island. The festival has hosted a number of jazz, classical, and Hawaiian folk musicians including Ray Brown, Gene Harris, James Moody, Howard Alden, Big Brother and the Holding Company and Hubert Laws. It also contributed to the economy by bringing some tourism to the town; the nearby Hāmākua Sugar Company discontinued the production of sugar in 1994. The Hāmākua Music Festival was discontinued in 2006, but was held again in 2009. 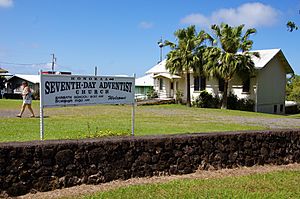 Ranching, along with nascent diversified agriculture, is the primary industry in Honokaa and the Hamakua District. Honokaa hosts a Saturday farmers' market, held on Māmane Street, and the Honoka'a Country Market features Hawaii Big Island Beef, a locally raised and grass fed beef.

While ranching and rodeos may seem idiosyncratic to some visitors, ranching in Hawaii has a long history. This tradition had been celebrated annually on Western Weekend beginning in 2006, and included children's activities, Country Western Bands, a block party with Paniolo barbecue, a rodeo, and the ribald Saloon Girl Contest. Western Weekend had been sponsored in part by a grant from the County of Hawaii Department of Research & Development, Hawaii Tourism Authority. The only paved road into Waipio Valley is through Honokaa.

Honokaʻa is the namesake and prominent setting in the 2009 Japanese Film Honokaʻa Boy (Japanese: ホノカアボーイ). The world premier occurred in the Honokaʻa People's Theatre, which was featured prominently in the film.

There is reference to a marketplace in the town in the film Cloud Atlas.

Honokaʻa High & Intermediate School is located in the CDP. Honokaʻa Elementary School shares some campus facilities such as the cafeteria and library.

All content from Kiddle encyclopedia articles (including the article images and facts) can be freely used under Attribution-ShareAlike license, unless stated otherwise. Cite this article:
Honokaa, Hawaii Facts for Kids. Kiddle Encyclopedia.