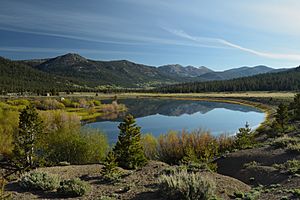 Green meadows and blue skies in the upper reaches of Hope Valley along Blue Lakes Road.

Hope Valley is a broad mountain valley in Alpine County, California, located on the eastern slope of the Sierra Nevada to the northeast of Carson Pass and south of Lake Tahoe. The valley served as a major thoroughfare for the passage of settlers and emigrants to and from California during the Gold Rush era. Sitting at an elevation of just above 7,000 feet (2,100 m) and framed by peaks reaching over 10,000 feet (3,000 m) high, Hope Valley is known for its wide vistas, fly fishing, fall colors, and winter activities. 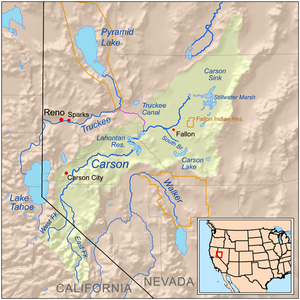 A map of the Carson River basin. Hope Valley is situated along the California portion of its west fork, where the river makes a sharp eastward turn after initially flowing north.

Situated on the eastern slope of the Sierra Nevada mountains, the upper end of the valley begins about four miles (6.4 km) northeast of Carson Pass, near the confluence where Red Lake Creek flows into the West Fork of the Carson River. From this point, the valley carries the river north for several miles before making a wide turn to the east. About a mile and a half east of the turn, just before reaching Sorensen's Resort, the wide valley abruptly narrows, and a steep V-shaped canyon carries the river further downstream toward the Nevada deserts.

Hope Valley is well connected to the California state highway network. California State Route 88 follows the course of the valley from southwest to northeast, extending further westward over Carson Pass and northeastward down Woodfords Canyon toward the Carson Valley. State Route 89 enters the valley through Luther Pass to the north, and intersects SR 88 at Pickett's Junction. Regular snowplow patrols keep both highways open year round, only closing in the event of particularly heavy snowstorms.

Hope Valley was historically inhabited by the Northern Washoe people, whose traditional homeland centered around Lake Tahoe and extended into the mountains to the south and west, and the desert valleys and ranges to the east. Every winter, a group of Northern Washoes would travel through the valley by snowshoe along a trail they called Pewećeli Yeweš. First they would cross westward to reach the western slope of the Sierra Nevada, where they would harvest salmon from the American River. Then, after smoking the salmon to preserve it for their return journey, they would retrace their steps eastward to bring the salmon to their compatriots overwintering in the desert to the east of Hope Valley.

In the summer of 1848, the soldiers of a Mormon Battalion detachment gave the valley its English name. These Mormons were returning to Utah after completing their service in the Mexican–American War. The soldiers were in poor spirits after three of their men had been killed in an incident about a month before at Tragedy Spring, across Carson Pass to the west. When they saw the valley, "[their] spirits revived when they arrived in sight of it." Thus they christened the newfound valley "Hope Valley". Henry W. Bigler, a soldier in the battalion, wrote that they "campt [sic] at the head of what we called Hope Valley as we began to have hope." Analogously, in 1855, surveyors christened two similar valleys to the south as "Faith Valley" and "Charity Valley", in reference to the three theological virtues of Christianity.

In the early 20th century, a proposal was studied to dam the valley in order to form a reservoir. This proposal, however, was never carried out.

Hope Valley is part of the Carson Ranger District of Humboldt–Toiyabe National Forest. With the exception of a few scattered inholdings, the entire area of Hope Valley is within this national forest. The valley borders Eldorado National Forest at Carson Pass, and the Lake Tahoe Basin Management Unit, a special unit of the U.S. Forest Service, at Luther Pass.

In 1989, the California Department of Fish and Wildlife designated 2,900 acres (1,200 ha) of valley bottom as Hope Valley Wildlife Area.

All content from Kiddle encyclopedia articles (including the article images and facts) can be freely used under Attribution-ShareAlike license, unless stated otherwise. Cite this article:
Hope Valley (California) Facts for Kids. Kiddle Encyclopedia.