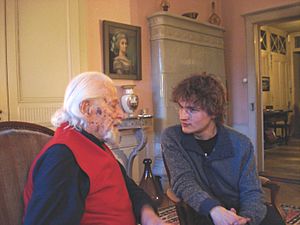 Hugues-Adhémar Cuénod (born 26 June 1902; died 6 December 2010) was a Swiss opera singer. He was a tenor. He was particularly famous for singing comic roles in opera. He had an extremely long career, lasting over 65 years. He was still singing in opera at the age of 92. He died at the age of 108.

Hugues Cuénod was born in Coiseaux-sur-Vevey. Cuénod he studied at the Ribaupierre Institute in Lausanne, at the conservatories in Geneva and Basel, and in Vienna. At first he sang in concerts. Then, in 1928, he got a part in the jazz opera Jonny spielt auf by Ernst Krenek when it was performed in Paris. The next year he sang for the first time in the United States in Noël Coward's Bitter Swee t. He worked in Geneva until 1933, then he went to Paris where he met the music teacher Nadia Boulanger. She had a big influence on his musical development. He made a concert tour of North America. From 1940 to 1946 he taught at the Geneva Conservatory. In 1943 he started singing in opera again, singing in Johann Strauss II's Die Fledermaus in Geneva. Then he sang at Milan's La Scala (1951), the Glyndebourne Festival (from 1954 on) and London's Royal Opera House, Covent Garden (1954, 1956 and 1958).

Cuénod sang music by many different composers. He was famous for singing the part of Basilio in Mozart's The Marriage of Figaro, the Astrologer in Rimsky-Korsakov's The Golden Cockerel, and Sellem in Stravinsky's The Rake's Progress. He sang with a light tenor voice, not a heavy heroic voice.

One of the most famous opera houses in the world is the Metropolitan Opera in New York. He did sing there, but not until he was 84. By that age almost all singers have been long retired. He sang the part of the Emperor Altoum in Puccini's Turandot in 14 performances there.

The very last time he sang on stage was in 1994 when he was 92. He sang M. Triquet in Tchaikovsky's Eugene Onegin when it was given by the Lausanne Opera at the Théâtre du Jorat in Mézières.

Cuénod lived with his male partner, Alfred Augustin, in the Vaud region of Switzerland. They lived in an 18th-century castle that had belonged to members of his family for several generations. The couple were in a civil union.

All content from Kiddle encyclopedia articles (including the article images and facts) can be freely used under Attribution-ShareAlike license, unless stated otherwise. Cite this article:
Hugues Cuénod Facts for Kids. Kiddle Encyclopedia.