Huron is a city in Beadle County, South Dakota, United States. It is the county seat of Beadle County. The Huron Daily Plainsman, also referred to as the Plainsman, is the newspaper. The first settlement at Huron was made in 1880. The city was named after the Huron Indians. It is currently the eighth largest city in South Dakota, but it once was the fourth. In recent years, Huron's population has once again started to grow after nearly 20 years of stagnation. A welcoming immigration policy coupled with an economic revival in the area has sparked development. A Walmart Supercenter opened in the mid 2000s. Since Walmart's opening more commercial and residential development has occurred with the completion of a new Runnings store (retailer specializing in farm and fleet products), and many new apartments, twin homes and houses.

The greater Huron area is home to approximately 30,000 people. The population within the city limits was 14,263 at the 2020 census. Huron was once in the running for capital of South Dakota but lost out to Pierre due to Pierre's positioning. Huron is home to the South Dakota State Fair, which is held six days before Labor Day. It is also home to a statue known as "The World's Largest Pheasant", which was refurbished in the summer of 2011. Huron has rail service, provided by the Rapid City, Pierre and Eastern Railroad. 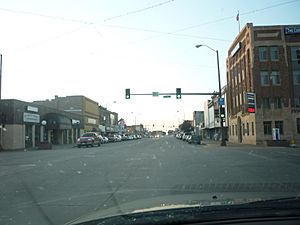 Downtown Huron in the Summer 2009

There were 5,418 households, of which 28.7% had children under the age of 18 living with them, 44.4% were married couples living together, 9.8% had a female householder with no husband present, 4.4% had a male householder with no wife present, and 41.3% were non-families. 36.1% of all households were made up of individuals, and 15% had someone living alone who was 65 years of age or older. The average household size was 2.27 and the average family size was 2.94.

Huron, located in east central South Dakota, is a result of railroad and land booms in the 1880s. The early history of the town is closely linked with the Chicago and Northwestern Railway. At the direction of Marvin Hughitt, general manager of the railroad, the west bank of the James River was selected as the division headquarters of the railroad. The company gained title to 880 acres (3.6 km2) of land at that location. Huron was named for the Huron Indians. Exactly who gave it the name was never established, apparently either Marvin Hughitt or someone in the Chicago office of the C&NW railroad company.

The original plat covered 11 blocks from 1st Street to 3rd Street and from Iowa Avenue SE to Ohio Avenue SW. Huron’s first settler was John Cain, a practical printer from Troy, New York. He learned in Chicago, from the railroad people, that they would have their chief town and operating headquarters at their James River crossing.

From 1880 until the capital was permanently located at Pierre in 1904, Huron was in the thick of the fight for the honor of being the capital city. Campbell and Winter Parks are the only remaining properties that were once designated capital grounds. Located between the two parks, Victorian houses originally built around 1906 occupy the city block on the land originally slated for the capitol building.

Huron is the home to a handful of celebrities. Cheryl Ladd replaced Farrah Fawcett of the original Charlie's Angels. Gladys Pyle was the first female member of the South Dakota House of Representatives and the first Republican woman in the US Senate. Hubert H. Humphrey was the Democratic nominee for president in 1968 and served as vice president under Lyndon B. Johnson.

The Huron School District has three public elementary schools, one middle school, and one high school. Huron High School's mascot is the "Tigers".

The principal of the Huron High School is Michael Radke, as of 2020–21 school year.

The current assistant principal of 2020–21 school year is Rodney Mittelstedt.

Huron is also home to a Catholic elementary school called Holy Trinity School, and a private Christian school on the north side of town called James Valley Christian School.

U.S. Route 14 is an east–west route passing through the northern part of the city. It intersects with north–south South Dakota Highway 37 in the city. This was the historical designation of the north–south U.S. Route 281, which was later moved to a more direct route that passes about ten miles west of Huron.

The Rapid City, Pierre and Eastern Railroad runs east–west, with maintenance facilities and a working roundhouse in the city.

All content from Kiddle encyclopedia articles (including the article images and facts) can be freely used under Attribution-ShareAlike license, unless stated otherwise. Cite this article:
Huron, South Dakota Facts for Kids. Kiddle Encyclopedia.