Mitchell is the county seat of Davison County, South Dakota, United States. The population was 15,254 at the 2010 census.

Mitchell is the principal city of the Mitchell Micropolitan Statistical Area, which includes all of Davison and Hanson counties.

The first settlement at Mitchell was made in 1879. Mitchell was incorporated in 1883. It was named for Milwaukee banker Alexander Mitchell, President of the Chicago, Milwaukee, and St. Paul Railroad (Milwaukee Road).

The campus of Dakota Wesleyan University is located in southwest Mitchell.

There were 6,696 households of which 26.4% had children under the age of 18 living with them, 41.1% were married couples living together, 9.5% had a female householder with no husband present, 3.7% had a male householder with no wife present, and 45.6% were non-families. 38.3% of all households were made up of individuals and 15.7% had someone living alone who was 65 years of age or older. The average household size was 2.16 and the average family size was 2.88.

There were 6,121 households out of which 28.9% had children under the age of 18 living with them, 46.6% were married couples living together, 9.1% had a female householder with no husband present, and 41.2% were non-families. 34.3% of all households were made up of individuals and 15.0% had someone living alone who was 65 years of age or older. The average household size was 2.27 and the average family size was 2.95.

Mitchell is home of the Corn Palace. The Corn Palace is decorated with several colors of dried corn and grains, creating murals. The theme of the external murals is changed yearly at fall harvest; internal murals are changed approximately every ten years. The building itself is used for several purposes including a basketball arena, the local high school prom, trade shows, staged entertainment, and the Shriner's Circus. 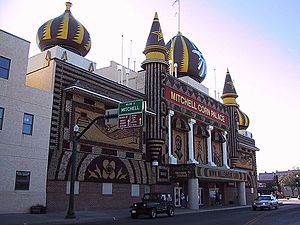 Street view of the Corn Palace

Mitchell is also the home of the Dakota Discovery Museum, whose mission is to present and preserve the history of the prairie and the people who settled it. The museum covers the time period from 1600, when the Native Americans were still largely undiscovered, to 1939, the end of the Great Depression. The museum holds one of the most complete and pristine collections of American Indian quill and bead-works. The Dakota Discovery Museum also features artists such as Harvey Dunn, James Earle Fraser, Charles Hargens and Oscar Howe. In the village area behind the main building are four authentic historical buildings, including an 1885 one-room school house and the fully furnished 1886 Victorian-Italianate home of the co-founder of the Corn Palace, Louis Beckwith. Two new features of the museum are Discovery Land, a hands-on activity area for children ages five to ten, and the Heritage Gardens Project, which brings indigenous plants to the gardens surrounding the museum and historical buildings.

The Mitchell Prehistoric Indian Village, an archaeological site where scientists are excavating a Native American village, is another attraction in the city. The site, near Lake Mitchell, is believed to have been occupied by ancestors of the present-day Mandan, who now reside in North Dakota. The excavation is unique in that it is enclosed by an Archeodome, a climate-controlled building built over the site, which allows scientists to continue their excavation work year-round.

All content from Kiddle encyclopedia articles (including the article images and facts) can be freely used under Attribution-ShareAlike license, unless stated otherwise. Cite this article:
Mitchell, South Dakota Facts for Kids. Kiddle Encyclopedia.