Kids Encyclopedia Facts
This article is about the Atlantic hurricane in 2003. For other storms of the same name, see Hurricane Erika

Hurricane Erika was a Atlantic hurricane that hit extreme northeastern Mexico near the Texas-Tamaulipas border. It happened on August 16, during the 2003 Atlantic hurricane season. Erika was the eighth tropical cyclone, fifth tropical storm, and third hurricane of the season that year. The storm was created from a non-tropical area of low pressure that was tracked for five days before developing in the eastern Gulf of Mexico on August 14. Under the influence of a high pressure system, Erika moved quickly westward and became stronger under favorable conditions. 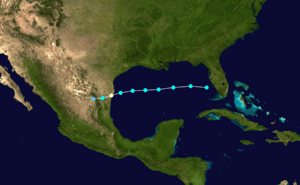 A weak surface area of low pressure came apart from a frontal system on August 8. It was moving southwestward during that time. On August 9, it created convection when it was passing underneath a cold-core upper-level low. As the system rapidly continued westward, a lot of the convection stayed near the center of the upper-level low, preventing development of a closed surface circulation. On August 13, while located near the northwestern Bahamas, an increase in convection made the upper-level low building downwards to the middle levels of the troposphere, which caused the development of an upper level anticyclone.

On August 14, a closed low-level circulation nearly developed to the east of Key Largo, Florida, but because of the deep convection remaining to the north over the mid-level center, it was weakened. The mid-level storm continued going westward and it moved across Florida. After crossing Florida, Hurricane Hunters showed a poor circulation, but with winds higher than tropical storm strength, and the system was designated as Tropical Storm Erika late on August 14 while located 85 miles (135 km) west of Fort Myers. 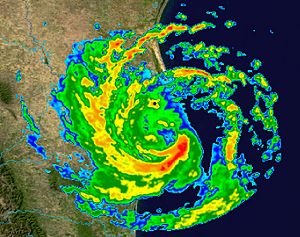 With well-established outflow and low levels of wind shear, Erika became stronger as the circulation became better defined. A high pressure system covered over the south-central United States, forcing the storm to move just south of due west at 25 mph (40 km/h). On August 15, convection were made into bands, and as its winds were turning into hurricane strength, an eye developed within the storm. The storm quickly weakened over the Sierra Madre Oriental, and Erika was calming down early on August 17. After entering the Gulf of California on August 18, It led to the formation of a tropical disturbance. It went to the northwest and weakened on August 20.

All content from Kiddle encyclopedia articles (including the article images and facts) can be freely used under Attribution-ShareAlike license, unless stated otherwise. Cite this article:
Hurricane Erika (2003) Facts for Kids. Kiddle Encyclopedia.