Hymenocallis coronaria requires a swift, shallow, water current and direct sunlight to flourish. The plant grows to about 3 feet (0.9 m) tall and develops from a bulb that lodges in cracks in rocky shoals. It blooms from early May to late June. Each fragrant flower blossom opens overnight and last for one day. They are visited and possibly pollinated by Paratrea plebeja, commonly known as the plebeian sphinx moth, and Battus philenor, the pipevine swallowtail butterfly.

The plant was first observed in 1783 by William Bartram and described as the "odoriferous Pancratium fluitans which almost alone possesses the little rocky islets". He saw it growing in the Savannah River near Augusta, Georgia.

Hymenocallis coronaria is under consideration for protection under the Endangered Species Act, due to entire populations being wiped out by dam construction. There are only approximately 50 extant populations of Hymenocallis coronaria left, all in the states of Alabama, Georgia, and South Carolina. The three largest remaining populations are located in the Cahaba River in Alabama, the Catawba River in South Carolina, and in the Flint River in Georgia. The Cahaba River has four separate populations, with three within the Cahaba River National Wildlife Refuge and one in Buck Creek); the Catawba has one within the Landsford Canal State Park; and the Flint has four, from Yellow Jacket Shoals to Hightower Shoals. Significant populations remain in the Savannah River basin, with three in the main channel and one each in the tributaries of Stevens Creek in South Carolina and the Broad River in Georgia. 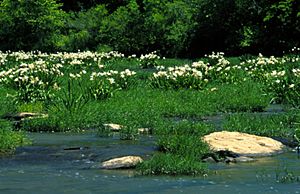 A stand of H. coronaria in the Cahaba River in Alabama

All content from Kiddle encyclopedia articles (including the article images and facts) can be freely used under Attribution-ShareAlike license, unless stated otherwise. Cite this article:
Hymenocallis coronaria Facts for Kids. Kiddle Encyclopedia.