Innisfallen or Inishfallen (from Irish: Inis Faithlinn, meaning "Faithlinn's island") is an island in Lough Leane; one of the three Lakes of Killarney in County Kerry, Ireland. 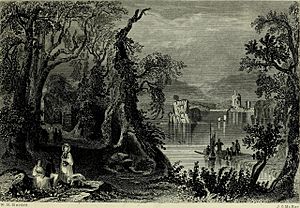 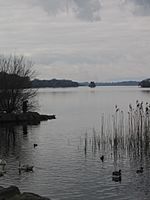 Innisfallen is home to the ruins of Innisfallen Abbey, one of the most impressive archaeological remains dating from the early Christian period found in the Killarney National Park. The monastery was founded in 640 by St. Finian the Leper, and was occupied for approximately 950 years. Over a period of about 300 of these, the monks wrote the Annals of Innisfallen, which chronicle the early history of Ireland as it was known to the monks. The monks were dispossessed of the abbey on August 18, 1594, by Elizabeth I.

The location of the monastery on the island is thought to have given rise to the name Lough Leane (Irish Loch Léin), which in English means "Lake of Learning". According to tradition the Irish High King Brian Boru received his education at Innisfallen under Maelsuthain O'Carroll. Maelsuthain has been credited as the possible originator of the Annals.

It is possible for tourists to visit the island during the summer months, with boats leaving from Ross Castle throughout the day.

While the abbey dates back to the seventh century, the oldest extant structure, dated to the tenth century, is the western two-thirds of the abbey church. The remainder of the church and the main abbey complex were constructed in the thirteenth century. A third structure, an oratory with a Hiberno-Romanesque doorway, dates from the twelfth century.

All content from Kiddle encyclopedia articles (including the article images and facts) can be freely used under Attribution-ShareAlike license, unless stated otherwise. Cite this article:
Innisfallen Island Facts for Kids. Kiddle Encyclopedia.