Kids Encyclopedia Facts
This page is about the village in Wisconsin, U.S.A.. For the 2008 film set in Montana, see Iron Ridge (film).

Iron Ridge is a village in Dodge County, Wisconsin, United States. The population was 929 at the 2010 census. The village was founded on a railroad line, named for the iron mined in the area. Its ZIP code is 53035.

There were 390 households, of which 30.0% had children under the age of 18 living with them, 44.1% were married couples living together, 9.2% had a female householder with no husband present, 6.7% had a male householder with no wife present, and 40.0% were non-families. 31.0% of all households were made up of individuals, and 10% had someone living alone who was 65 years of age or older. The average household size was 2.38 and the average family size was 3.00. 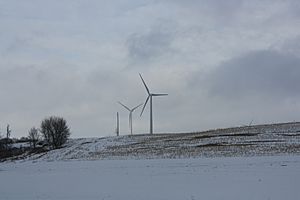 Iron Ridge is the community in Dodge County closest to the Butler Ridge Wind Farm, a wind farm that contains 36 turbines that are 300 feet wide and 260 feet tall. It sits along the Niagara Escarpment, a ridge that originates in Ontario, runs through Wisconsin, and ends in Illinois. It was initially developed by Midwest Wind Energy, and then acquired by Babcock & Brown, which carried it through construction. After Babcock & Brown's liquidation in 2009, the wind farm was acquired by NextEra Energy Resources. Part of the power is sold to WPPI Energy.

St. Matthew Lutheran School is a Christian 4K-8 school of the WELS in Iron Ridge.

All content from Kiddle encyclopedia articles (including the article images and facts) can be freely used under Attribution-ShareAlike license, unless stated otherwise. Cite this article:
Iron Ridge, Wisconsin Facts for Kids. Kiddle Encyclopedia.