Kids Encyclopedia Facts
This page is about the television series. For the 1999 EP, see Pain (U.S. band)#Discography.

Jabberjaw is an American animated television series created by Joe Ruby and Ken Spears and produced by Hanna-Barbera which aired 16 original episodes on ABC from September 11 to December 18, 1976. Reruns continued on ABC until September 3, 1978.

Jabberjaw, a 15-foot air-breathing great white shark, is the drummer for The Neptunes, a rock group made up of four teenagers — Biff, Shelly, Bubbles and Clamhead — who live in an underwater civilization in the year 2076. Jabberjaw and The Neptunes travel to various underwater cities where they encounter and deal with assorted megalomaniacs and supervillains who want to conquer the undersea world.

Like a great deal of Hanna-Barbera's 1970s output, the format and writing for Jabberjaw was similar to that for Scooby-Doo, Josie and the Pussycats and Speed Buggy. The show also drew inspiration (in the use of a shark as a character) from the overall shark mania of the mid-1970s caused by the then-recent film Jaws. It also shared The Flintstones' penchant for making use of puns as the names of locations, people, etc., in this case, ocean-themed puns (such as "Aqualaska" instead of Alaska). Every episode ended with a musical chase sequence where Jabberjaw and the gang would run from the villains, performing zany cartoon antics in order to escape while a song by The Neptunes played in the background. 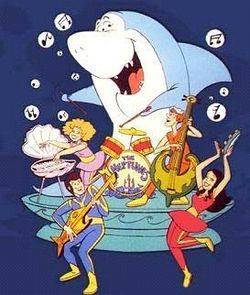 The series features the following five main characters throughout its run: 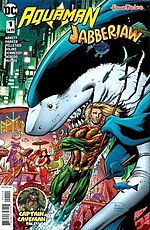 A rebooted Jabberjaw interacts with Aquaman. From the Aquaman/Jabberjaw Special#1

In 2005, a Jabberjaw Wacky Wobbler bobblehead figure was released by Funko.

All content from Kiddle encyclopedia articles (including the article images and facts) can be freely used under Attribution-ShareAlike license, unless stated otherwise. Cite this article:
Jabberjaw Facts for Kids. Kiddle Encyclopedia.