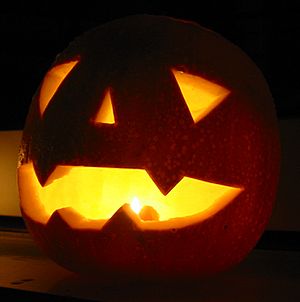 A jack-o'-lantern lit by a candle

A Jack-o'-lantern is a carved pumpkin, turnip, beet, or potato. In the 19th and 20th centuries people in Scotland and Ireland carved Halloween lanterns from large yellow turnips. This custom has become less prevalent in recent years as supermarkets have begun selling the larger and easier-to-carve American pumpkins.

In Irish lore, the Jack-o'-lantern is from the story of Stingy Jack. Jack was a clever man who cheated the devil several times. Once when Jack was leaving hell, the devil threw him a glowing coal to light his way. Jack put the coal in a hollowed-out turnip to make the first "Jack-o'-lantern". Lore says Jack can still be seen wandering the world with his turnip lantern, especially around All Saints Day, November 1.

In the United States, the carved pumpkin was first associated with the harvest season in general, long before it became an emblem of Halloween. In 1900, an article on Thanksgiving entertaining recommended a lit Jack-o'-lantern as part of the festivities. 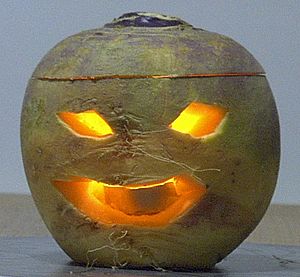 Jack-o'-lantern made from a turnip

To make a Jack-o'-lantern, the top of the pumpkin surrounding the stump of the vine is cut off. This top will be used as a "lid" when the Jack-o'-lantern is completed. The seeds and pulp inside the pumpkin are scooped out using a spoon or one's hands. The seeds may be roasted in a hot oven, and then salted to make a snack.

Once the inside of the pumpkin is clean, a face is carved into one side of the pumpkin. The eyes and nose are usually triangles. The mouth is usually filled with jagged teeth. A candle, devotional candle in a candle-holder, or a flashlight is put inside the Jack-o'-lantern and lit. The "lid" is replaced. The lid may be placed slightly askew to keep the candle alit.

In the United States, a completely carved and lit Jack-o'-lantern is put on the porch, the porch steps, or in a window to welcome trick-or-treaters on Halloween. Once the pumpkin is carved, it is good for nothing else and lasts only a day or two before it starts to rot. Pumpkins used to make Jack-o'-lanterns are inedible.

All content from Kiddle encyclopedia articles (including the article images and facts) can be freely used under Attribution-ShareAlike license, unless stated otherwise. Cite this article:
Jack-o'-lantern Facts for Kids. Kiddle Encyclopedia.