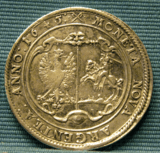 Jacob Kettler (German: Jakob von Kettler) (28 October 1610 – 1 January 1682) was a Baltic German Duke of the Duchy of Courland and Semigallia (1642–1682). Under his rule, the duchy reached its peak in wealth and engaged in colonization.

Kettler was born in Goldingen, now known as Kuldīga. He was the son of Wilhelm Kettler and Princess Sophia of Prussia, a daughter of Albert Frederick, Duke of Prussia, and was a godson of King James I of England. While his father was exiled from the duchy, Jacob lived in the courts of Stettin and Berlin. He studied in Rostock and at the University of Leipzig and sympathized with the ideas of mercantilism.

In 1633, he led a Curonian regiment in the Smolensk War between the Polish–Lithuanian Commonwealth and Russia. In 1634, he made a grand tour of Europe, visiting Paris, London, and Amsterdam, where he studied shipbuilding. In 1638, he became co-ruler of the duchy and in 1642 sole Duke of Courland.

Under Kettler's rule, the duchy traded with the Netherlands, Portugal, England, France, and other nations. He started large scale reforms of the duchy's economy, improved its agriculture, opened many manufactures and started a shipbuilding industry. During his reign, the Duchy became de facto independent of the Polish crown, because all contracts with foreign powers were signed as between independent states. After 1646, all customs administration of the Duchy also was in the Duke's power.

The Duchy was involved in colonisation. In 1651 Jacob sent a fleet to build Fort Jacob on the Gambia River, on an island that would later be known as St. Andrews. In 1654, he conquered Tobago with forces from the Das Wappen der Herzogin von Kurland, a double-decker ship armed with 45 cannons, carrying 25 officers, 124 Courlander soldiers, and eighty families of Latvian colonists. The colony on Tobago was named Neu Kurland ("New Courland"). In 1654, Duke Jacob was a party to the Treaty of Westminster.

The Duke was taken prisoner by the Swedes from 1658 to 1660, during the Northern Wars. Together with his family, he was held captive in Riga and later in Ivangorod. During this time, his colonies were attacked and lost and his fleet destroyed. After the war ended, he rebuilt the duchy's fleet and retook the island of Tobago from the Dutch. Some believe he also intended to colonize Australia, which had at that time been discovered and claimed by the Dutch, with whom he was at war. He supposedly had the blessing of Pope Innocent X.

However, the pope soon died, and the new pope was unwilling to support the plan. For the rest of his reign he tried to reach a pre-war level of wealth but managed to do this only partly. The Duke died in Mitau (Jelgava) on 1 January 1682.

Jacob Kettler is remembered as fair ruler who gave opportunities to the local Latvian peasants and even knew the Latvian language.

All content from Kiddle encyclopedia articles (including the article images and facts) can be freely used under Attribution-ShareAlike license, unless stated otherwise. Cite this article:
Jacob Kettler Facts for Kids. Kiddle Encyclopedia.