Roldós was born in Guayaquil on November 5, 1940. He attended high school at the Vicente Rocafuerte National School. He studied law and social sciences at the University of Guayaquil. He was an excellent student and won many awards, medals and scholarships. 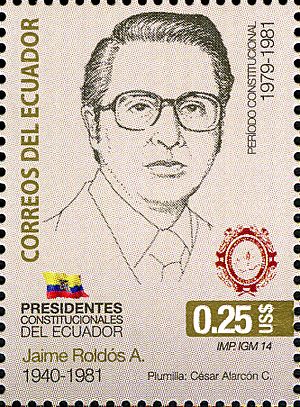 Jaime Roldós Aguilera on a 2014 stamp of Ecuador

At the age of 37, he ran for president on a populist platform. In the first round, he received the greatest number of votes, but not the 50% plus one needed to avoid a runoff. He won the second round of elections against Sixto Durán Ballén, and assumed office on August 10, 1979.

He was married to Martha Bucaram until his death in 1981.

On May 24, 1981, a plane carrying the President, Minister of Defense, assistants and their spouses crashed into the Huairapungo Mountain, in Celica Canton of Loja Province. The crash left no survivors: killed along with the president were First Lady Martha Bucaram, Minister of Defense Marco Subía Martínez and his wife, as well as two aides-de-camp and three other passengers.

All content from Kiddle encyclopedia articles (including the article images and facts) can be freely used under Attribution-ShareAlike license, unless stated otherwise. Cite this article:
Jaime Roldós Aguilera Facts for Kids. Kiddle Encyclopedia.