James Chipman Fletcher (June 5, 1919 – December 22, 1991) served as the 4th and 7th Administrator of NASA, first from April 27, 1971 to May 1, 1977, under President Richard M. Nixon, and again from May 12, 1986 to April 8, 1989, under President Ronald Reagan. As such, he was responsible for the early planning of the Space Shuttle program, and later for its recovery and return to flight after the Space Shuttle Challenger accident. Prior to this, he was president of the University of Utah from 1964 to 1971. 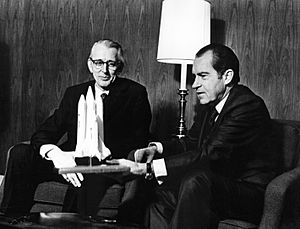 Fletcher was born in Millburn, New Jersey. His father, Harvey is known as the "Father of Stereophonic sound". Fletcher earned a bachelor's degree in physics from Columbia College of Columbia University and a Ph.D in physics (1948) from the California Institute of Technology. After holding research and teaching positions at Harvard and Princeton Universities, he joined Hughes Aircraft in 1948 and later worked at the Guided Missile Division of the Ramo-Wooldridge Corporation. 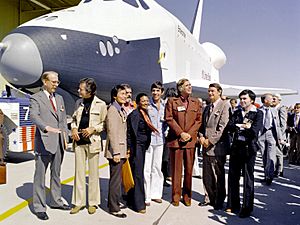 Dr. James Fletcher (left) with the cast of Star Trek in front of the Space Shuttle Enterprise at the Palmdale manufacturing facility

During his first administration at NASA, Fletcher was responsible for beginning the Space Shuttle effort, as well as the Viking program that sent landers to Mars. He oversaw the Skylab missions and approved the Voyager space probes and the Apollo-Soyuz Test Project.

When he left NASA in 1977, Fletcher became an independent consultant in McLean, Virginia, and served on the faculty of the University of Pittsburgh. For nine years, he was active as an advisor to key national leaders involved in planning space policy. Among other activities, he served on an advisory board involved in developing the Strategic Defense Initiative.

In 1986, President Ronald Reagan selected Fletcher to administer NASA for a second time, to help the agency recover from the Space Shuttle Challenger accident. Shuttle flights went into a two-year hiatus while Fletcher ensured that NASA reinvested heavily in the program's safety and reliability, made organizational changes to improve efficiency, and restructured its management system. He oversaw a complete reworking of the components of the Shuttle to enhance its safety, including a redesign of the solid rocket boosters, and added an egress method for the astronauts. The Space Shuttle returned to flight on September 29, 1988. Fletcher also approved the Hubble Space Telescope program. He served as Administrator until April 8, 1989, into the term of Reagan's successor, President George H. W. Bush.

Fletcher died in December 1991 of lung cancer at his home in suburban Washington, DC. He was buried at Salt Lake City Cemetery. He was a Mormon.

All content from Kiddle encyclopedia articles (including the article images and facts) can be freely used under Attribution-ShareAlike license, unless stated otherwise. Cite this article:
James C. Fletcher Facts for Kids. Kiddle Encyclopedia.