James Edward Cracknell, OBE (born 5 May 1972) is a British athlete, rowing champion and double Olympic gold medalist. He was married to TV and radio presenter Beverley Turner, with whom he has three children. Cracknell was appointed OBE for "services to sport" in the 2005 New Year Honours List.

Cracknell began rowing whilst attending the independent Kingston Grammar School and rowed at the Junior World Championships in 1989 and 1990, winning a gold medal in 1990. He graduated from the University of Reading as a Bachelor of Science (BSc) in Human Geography in 1993, followed by a PGCE at the Institute of Education and a Master of Science (MSc) from Brunel University in 1999. Moving into the senior squad, Cracknell made numerous appearances in the World Rowing Championships; however, he did not win any medals prior to the 1996 Summer Olympics. He qualified in the double scull for the 1996 Games, but fell ill with tonsillitis and was unable to race. In 1997, he won a seat in the men's coxless fours, with Steve Redgrave, Matthew Pinsent and Tim Foster. With this crew, he won the World Rowing Championships in 1997, 1998 and 1999 (with Ed Coode replacing the injured Foster), and finally the gold medal at the 2000 Summer Olympics. In August 2000, the month prior to winning gold in Sydney, he took part in a 3-part BBC documentary entitled Gold Fever. This followed the coxless four team in the years leading up to the Olympics, including video diaries recording the highs and lows in their quest for gold.

With Redgrave then having retired, Cracknell swapped from rowing on strokeside to bowside to join Pinsent in the coxless pairs. The pair won the World Championships in 2001, when they also won the coxed pairs, and 2002. However, in 2003 a disappointing season was capped by a failure to win the World Championships, and Pinsent and Cracknell were shifted into the coxless four, with Steve Williams and Alex Partridge. Ed Coode replaced the injured Partridge in time for the 2004 Summer Olympics and this crew won the gold medal in Athens, beating world champions Canada by 0.08s.

He came second in the pairs division of the 2005–2006 Atlantic Rowing Race in "Spirit of EDF Energy", partnered by Ben Fogle. Although they took first place in the line honours of the pairs event (overall, they were third to finish the race behind the two men's fours), the use of ballast water during the race resulted in the pair being moved to second position of the pairs event in accordance with the race rules. The event helped raise money for Children in Need.

They made landfall in Antigua at 07.13 GMT on 19 January 2006, a crossing time of 49 days, 19 hours and 8 minutes. In February 2006, he announced his decision to retire from competitive rowing. Shortly after, Through Hell and High Water, a BBC/Twofour television programme of Cracknell and Fogle's experience of the Atlantic race, was aired. The pair wrote a book called The Crossing: Conquering the Atlantic in the World's Toughest Rowing Race, about their trip.

On 4 March 2006, Cracknell's home was burgled: his Olympic gold medals were stolen, together with his wedding ring and a computer containing 20,000 words of a new book and family photographs. The gold medals were subsequently recovered by a neighbour's dog where the thief had discarded them. The thief, Mark Murphy, 30, was caught and jailed.

He ran the London Marathon on 23 April 2006, in a time of 3 hours, finishing over an hour ahead of his rowing teammate Matthew Pinsent.

In January 2008 Cracknell set up Threshold Sports with Julian Mack and Charlie Beauchamp.

In December 2008 he set off yet again with former teammate from the Atlantic Row, Ben Fogle, and Dr Ed Coats (the winner of a nationwide search), this time to take part in the inaugural Amundsen Omega3 South Pole Race. The team traversed the 473.6 miles suffering frostbite, infected blisters, dramatic weight-loss, pneumonia and exhaustion and came second only to a pair of Norwegians (over 20 hours). The BBC aired a 5 x 1-hour, prime-time Sunday night series of the adventure, On Thin Ice (Twofour), in June–July 2009. The series was accompanied by a self-penned book of the race, Race to the Pole (MacMillan).

In July 2008 Cracknell competed in the European Triathlon Championships for GBR for his age group and in November 2009 he took part in the New York Marathon. In April 2009, James completed the 125-mile non-stop Devizes to Westminster Canoe Marathon in a two-man racing K2 kayak with canoe partner Bernie Shosbree. 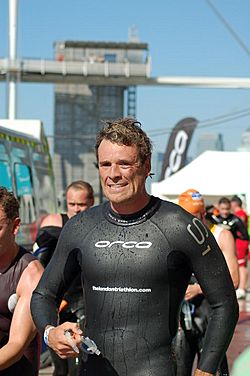 James Cracknell at the London Triathlon 2007

In August 2009 Cracknell attempted to break the non-stop Land's End to John O'Groats mixed tandem world record along with Olympic gold medallist Rebecca Romero. The pair got just past Johnstone Bridge in Scotland before being forced to stop due to problems with Romero's knees. They were on course to break the record by over three hours. The attempt was to launch the 2010 Ride Across Britain that Cracknell's company organised

In April 2010 Cracknell became the highest placed Briton ever in the 25-year history of the Marathon des Sables, finishing 12th. His exploits were filmed for a Discovery Channel documentary The Toughest Race on Earth to be aired in October 2010. This highest ever placing was beaten in 2013 by another Briton, Danny Kendall who finished 10th.

Six months after his cycling accident which damaged his frontal lobe (see below), Cracknell competed in the Yukon Arctic Ultra. He finished second in the 430-mile race across the frozen Alaskan countryside, beaten only by British cyclist Alan Sheldon who beat Cracknell's 163:20 with his own 99:30. Cracknell's participation in the race was filmed for the documentary The Coldest Race on Earth aired on the Discovery Channel. He ran the 2012 London Marathon in just under three hours, one of the fastest celebrities, but behind Nell McAndrew.

In 2019, Cracknell participated in the seventeenth series of Strictly Come Dancing, where he was partnered with professional dancer Luba Mushtuk. He was the first celebrity to be eliminated from the show after losing the dance off to David James and Nadiya Bychkova.

Cracknell has presented sport on ITV and Channel 4. He covered The Boat Race 2007 with Mark Durden-Smith for ITV and is the presenter of ITV's coverage of the British Superbike Championship. He is also the main presenter of Channel 4's Red Bull Air Race World Series coverage. He is a contracted columnist with The Daily Telegraph writing about various topics including sport, motoring, gardening, cookery and others.

From 27 February 2008 James Cracknell covered over 1,400 miles from Britain to Africa in 10 days, rowing, cycling and swimming. He rowed from Dover, England to Cap Gris Nez, France, then cycled to Tarifa, Spain, and finally swam across the Strait of Gibraltar from Tarifa to Punta Cires, Morocco. The comedian David Walliams joined him for the final part of his journey providing support from his previous experience of swimming the English Channel. The money raised by the challenge went towards the BBC's Sport Relief charity, with highlights of the action broadcast on 14 March. He was the celebrity guest at The WiG GiG which raise over £10,000 for Macmillan Cancer Support.

In January 2009, Cracknell took part in the Amundsen Omega 3 South Pole Race with his TV presenter friend Ben Fogle and Dr Ed Coats as members of Team QinetiQ, finishing in second, 20 hours behind the winning Norwegian team. The race and the reasons behind was broadcast on BBC Television during summer 2009 in the series On Thin Ice. The trio raised funds for the children's medical research charity Sparks, chosen as the charity partner in memory of Cracknell's niece, Eva, who died at six days old after suffering oxygen deprivation at birth.

On Saturday 3 October 2009, Cracknell and Ben Fogle started a 60-hour (estimated) journey from Edinburgh to London riding a rickshaw in support of SSAFA. They aimed to arrive in time for the Pride of Britain Awards ceremony on Monday 5 October 2009. They had to endure storm force gales in Scotland and Northumberland on their first day of the 450-mile ride. Early on the last day they made a stop at Etonbury Middle School in Arlesey, off the A1 road to London, where about 100 children welcomed them and to wave them on their way.

Having been a prominent supporter of the NOtoAV campaign in the 2011 United Kingdom Alternative Vote referendum, in June 2013 Cracknell revealed his intention to stand in the European Parliament election of 2014. He commented "The European Union is going to have an effect on my children and grandchildren. I'd like to think I can have an effect - bring a fresh perspective. It's not something I have to do, it's something I want to do."

In October 2013, Cracknell was announced as a Conservative candidate in South West England and Gibraltar, together with Ashley Fox, Julie Girling, Georgina Butler, Sophia Swire, and Melissa Maynard.

As in the rest of the country, the UK Independence Party ran strongly in South West England in 2014, gaining 51,000 more votes than the Conservatives. Although he was at number 3 on the Conservative party list, Cracknell was unsuccessful.

In 2002, Cracknell married TV presenter Beverley Turner, with whom he lived in Chiswick. The couple had three children – a son, Croyde (born October 2003), and two daughters, Kiki (born March 2009) and Trixie (born April 2011). They announced their separation on 29 March 2019 after 17 years of marriage. In January 2021, he announced his engagement to Jordan Connell.

All content from Kiddle encyclopedia articles (including the article images and facts) can be freely used under Attribution-ShareAlike license, unless stated otherwise. Cite this article:
James Cracknell Facts for Kids. Kiddle Encyclopedia.