Jamestown is a town in the Mid North region of South Australia 207 kilometres (129 mi) north of Adelaide.

It is on the banks of the Belalie Creek and on the Crystal Brook-Broken Hill railway line between Gladstone and Peterborough, and ultimately on the main line linking Adelaide and Perth to Sydney. At the 2006 census, Jamestown had a population of 1,407, and is the thriving centre of a prosperous area.

Jamestown (originally James Town) was named after Sir James Fergusson, the Governor of South Australia when the town was surveyed in 1871. Its streets are all named for towns in his native Scotland.

Major products of the area are grain, legumes, wool and timber. The world's first plantation forest was the Bundaleer Forest first planted in the area in 1876. The town is also notable for Catford Engineering company.

Jamestown is the council seat of its local municipality, Northern Areas Council. The local area had first been granted self-government as the District Council of Belalie in 1875, but the township of Jamestown itself had separated as the Corporate Town of Jamestown in 1878. The Belalie council, comprising the surrounding areas, merged into the new District Council of Jamestown in 1935. Jamestown continued with two municipalities, one for the town and one for the surrounding area, until their amalgamation in 1991; the amalgamated municipality then merged into the new Northern Areas Council in 1997.

Jamestown is in the South Australian Legislative Assembly electoral district of Stuart and the federal Division of Grey. 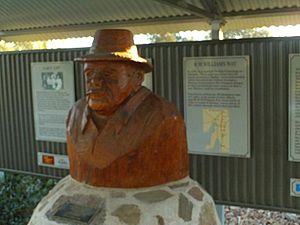 Jamestown has proud military history, with monuments featured within the township. The Memorial Park features a restored 1907 Krupp SFH02 Cannon. It was captured in Palestine in November 1917 as part of the World War I campaign. In 1918 the Cannon was ceded to the 9th Australian Light Horse Regiment in the initial distribution of captured weapons.

All content from Kiddle encyclopedia articles (including the article images and facts) can be freely used under Attribution-ShareAlike license, unless stated otherwise. Cite this article:
Jamestown, South Australia Facts for Kids. Kiddle Encyclopedia.