Jana Gana Mana is the national anthem of India. It was written in Sanskritised Bengali — a form of the Bengali language that is similar to Sanskrit. The lyrics are the first part of a poem written by Nobel Prize winner Rabindranath Tagore.

Jana Gana Mana was first sung at the Calcutta Session of the Indian National Congress, on 27 December 1911. It was officially adopted by the Constituent Assembly as the Indian national anthem on January 24, 1950.

The Bengali lyrics are written below in the Roman alphabet. 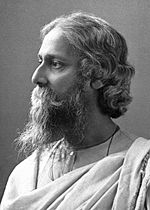 Rabindranath Tagore, the author and composer of the national anthem of India and Bangladesh

You are the ruler of the minds of all people,
Dispenser of India's destiny.
Thy name rouses the hearts of Punjab, Sindh,
Gujarat and Maratha,
Of the Dravida,Orissa and Bengal;
It echoes in the hills of the Vindhyas and Himalayas,
mingles in the music of Yamuna Ganges and is
chanted by the waves of the Indian Sea.
They pray for thy blessings and sing thy praise.
The saving of all people waits in thy hand,
Thou dispenser of India's destiny.
victory forever.

All content from Kiddle encyclopedia articles (including the article images and facts) can be freely used under Attribution-ShareAlike license, unless stated otherwise. Cite this article:
Jana Gana Mana Facts for Kids. Kiddle Encyclopedia.