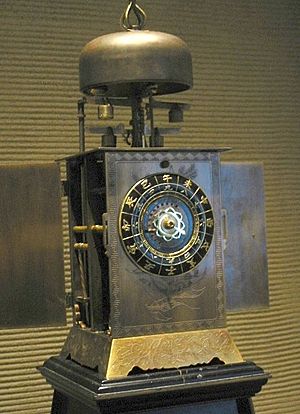 The Japanese clock is a device made to tell the time according to Japanese tradition. These clocks were introduced to Japan via Jesuit missionaries in the 16th century. In 1612, the clock-maker of Philip II of Spain created a working timepiece which became a gift for Tokugawa Ieyasu. 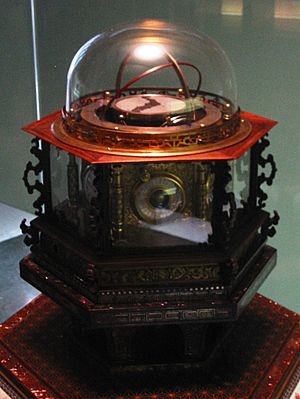 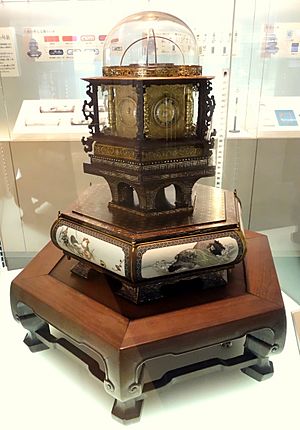 The typical clock had six numbered hours from 9 to 4, which counted backwards from noon until midnight; the hour numbers 1 through 3 were not used in Japan for religious reasons, because these numbers of strokes were used by Buddhists to call to prayer. The count ran backwards because the earliest Japanese artificial timekeepers used the burning of incense to count down the time.

In addition to the numbered temporal hours, each hour was assigned a sign from the Japanese zodiac. Starting at dawn, the six daytime hours were:

From dusk, the six nighttime hours were:

All content from Kiddle encyclopedia articles (including the article images and facts) can be freely used under Attribution-ShareAlike license, unless stated otherwise. Cite this article:
Japanese clock Facts for Kids. Kiddle Encyclopedia.