Jarosław Aleksander Kaczyński (born 18 June 1949) is a Polish politician and lawyer, and the current leader of the Law and Justice party, which he co-founded in 2001 with his identical twin brother, late Polish President Lech Kaczyński.

Even though he does not serve as either prime minister or president, and is formally just a member of the Sejm, he is the considered one of the most powerful men in Poland, as well as one of the most influential leaders in the European Union. 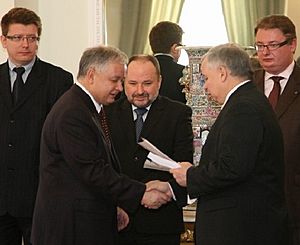 Kaczyński is the identical twin brother of the late Polish President Lech Kaczyński. Jarosław and Lech were born in Warsaw.

The Kaczyński brothers are sons of Rajmund (an engineer who served as a soldier of the Armia Krajowa in World War II and a veteran of the Warsaw Uprising) and Jadwiga (a philologist at the Polish Academy of Sciences).

As children, Jarosław and Lech Kaczyński starred in the 1962 Polish film The Two Who Stole the Moon, based on a popular children's story by Kornel Makuszyński.

Kaczyński resides in Warsaw. He is not married. He lived with his ailing mother until her hospitalization. Kaczyński owns no computer and is said to have opened his first bank account only in 2009.

All content from Kiddle encyclopedia articles (including the article images and facts) can be freely used under Attribution-ShareAlike license, unless stated otherwise. Cite this article:
Jarosław Kaczyński Facts for Kids. Kiddle Encyclopedia.