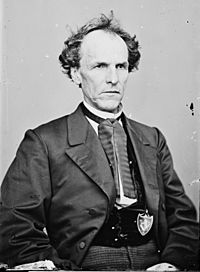 Jayhawkers is a term that came into use just before the American Civil War in Bleeding Kansas. It was adopted by militant bands of Free-Staters. These bands, known as "Jayhawkers", were guerrilla fighters who often clashed with pro-slavery groups from Missouri known at the time as "Border Ruffians".

After the Civil War, the word "Jayhawker" became synonymous with the people of Kansas. Today a Jayhawk is typically a student, fan, or alumnus of the University of Kansas. "Jayhawk" is also the name of their mascot, a mythical bird with a history based on the Bleeding Kansas era term.

The term was adopted as a nickname by a group of emigrants traveling to California in 1849. The origin of the term may go back as far as the Revolutionary War, when it was reportedly used to describe a group associated with American patriot John Jay.

About 1858 the slang term "jayhawking" became widely used as a synonym for stealing. It was also used at the same time during the Kansas territorial period. The term came to be used to describe militant bands nominally associated with the free-state cause.

Another historian of the time described the jayhawkers as bands of men that were willing to fight, kill, and rob for a variety of motives that included defense against pro-slavery. They fought "Border Ruffians" raiding into Kansas. In Missouri, "Jayhawker" was a derogatory term for Kansans who raided into Missouri, murdered slave owners, burned and looted their property in the name of freeing slaves.

James Henry Lane , moved to Lawrence, Kansas in 1855. Despite being a Democrat he became affiliated with the Free-Staters. He soon became one of the leaders of the Jayhawkers. Later a Union General and U.S. Senator, he led the 3rd and 4th Kansas Volunteer Infantry and 5th Kansas Cavalry on raids into Missouri. They burned most of the town of Osceola, Missouri, stole everything they could and freed the slaves in the town.

In 1890, the football team of the University of Kansas called themselves the "Jayhawkers". Later it was shortened to "Jayhawk". They became synonymous with their mascot, a mythical bird called the Jayhawk. Their connections to the Jayhawkers of the Bleeding Kansas era and Civil War are a part of their history.

All content from Kiddle encyclopedia articles (including the article images and facts) can be freely used under Attribution-ShareAlike license, unless stated otherwise. Cite this article:
Jayhawker Facts for Kids. Kiddle Encyclopedia.