Jeffrey Skinner (born May 16, 1992 in Markham, Ontario) is a Canadian professional ice hockey centre for the Carolina Hurricanes of the National Hockey League (NHL). He was picked by the Carolina Hurricanes with the seventh overall pick in the 2010 NHL Entry Draft. He played in the OHL with the Kitchener Rangers. He was currently the youngest hockey player in the NHL during the 2010-11 season. 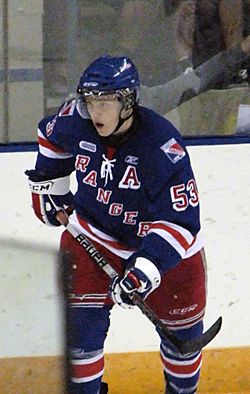 All content from Kiddle encyclopedia articles (including the article images and facts) can be freely used under Attribution-ShareAlike license, unless stated otherwise. Cite this article:
Jeff Skinner Facts for Kids. Kiddle Encyclopedia.